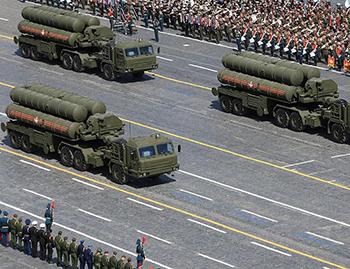 Turkey and Russia have agreed “in principle” on joint production of S-400 anti-ballistic missiles in the short and medium term, Foreign Minister Mevlüt Çavuşoğlu has said, denying that Moscow has refused the transfer of technology to Turkey.

“We have not officially received anything negative on this. [Russian President Vladimir] Putin himself has told us that we can take joint steps for joint production. So the technology will be upgraded as well … And if Russians do not look positive at this then we’ll make the agreement with another country,” Çavuşoğlu told daily Akşam on Oct. 9.

“The agreement we have reached at the moment is about purchase,” he added, stressing that Turkey urgently needs the systems for defense of the country’s airspace.

“We wish we could find the opportunity for protection of our entire airspace, with our NATO allies,” Çavuşoğlu said.

“If anti-Russia countries do not want Turkey to purchase the S-400 system then they should give us [equivalent systems],” he added.

Putin’s aide, Vladimir Kojin, had earlier said Russia would not provide the transfer of technology to Turkey.