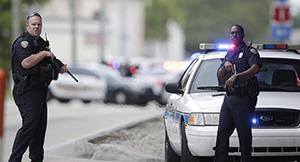 A Texas Tech University police officer was shot dead at the campus by the 19-year-old student on Monday evening. The incident happened reportedly after the local police performed the student’s welfare check and found the evidence of drugs in his room.

MOSCOW (Sputnik) – A student shot a police officer dead at the Texas Tech University, fled the scene of the crime but later was detained, the university said in a statement.

“Following a student welfare check, Texas Tech Police Officers brought a suspect to the police station for standard debriefing. During this time, the suspect pulled a gun and shot an officer. The suspect fled on foot and is currently still at-large,” the university said on late Monday.

​The later statement said that the suspected attacker had been detained.

“The suspect has been apprehended at this time. Lockdown has been lifted on campus. Please continue to avoid Texas Tech Police Department and the north side of campus,” the university added.

Motives of the attacker remain unknown.

The incident took place just eight days after the deadly shooting in Las Vegas where gunman Stephen Paddock opened fire on a crowd, killing 59 people and wounding more than 500 others.