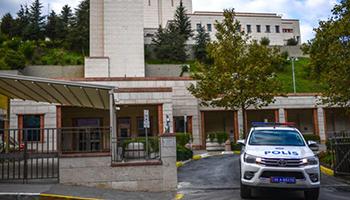 Amid a visa crisis with the US over the arrest of a Turkish national working at the İstanbul Consulate General last week, the wife and child of another US Consulate staff member for whom Turkish authorities issued a detention warrant on Sunday morning were detained in Amasya over links to the faith-based Gülen movement, which the Turkish government accuses of being behind a failed coup last year.

According to a Hürriyet daily story on Monday, US Consulate employee N.M.C.’s wife S.C. and his child K.İ.C. were detained in the Merzifon district of Amasya province as part of an investigation into Gülen movement members while N.M.C. has remained in the consulate building in İstanbul.

The İstanbul Chief Public Prosecutor’s Office issued a detention warrant for N.M.C., who works in a consulate department handling issues with Turkish law enforcement. The police were unable to detain him because he has remained in the consulate building. According to the report, his wife opened a bank account at Bank Asya, which was seized in 2015 by the Turkish government over links to the Gülen movement after President Recep Tayyip Erdoğan publicly targeted it.

Earlier on Monday, Turkish Justice Minister Abdulhamit Gül said he was not aware of a decision for the detention or arrest of a second US Consulate employee.

The US Embassy in Ankara on Sunday announced that it had suspended all non-immigrant visa services at its diplomatic facilities in Turkey.

“Recent events have forced the United States Government to reassess the commitment of the Government of Turkey to the security of US Mission facilities and personnel. In order to minimize the number of visitors to our Embassy and Consulates while this assessment proceeds, effective immediately we have suspended all non-immigrant visa services at all U.S. diplomatic facilities in Turkey.”

“This measure will apply to visas in passports as well as e-Visas and visas acquired at the border,” the Turkish Embassy added in its statement.