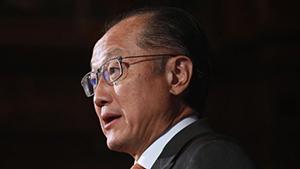 The world is on a “crash course” as people’s hopes collide with a future in which millions of jobs are automated, the World Bank chief has said.

The World Bank president was speaking in New York ahead of the group’s annual meeting in Washington DC this week.

The remarks come amid wider concerns about political threats to economic growth.

The World Bank plans to publish a ranking of countries that measures investments in “human capital”, such as education.

The focus is a shift for the organisation, which was established after World War Two to spur infrastructure reconstruction.

But Dr Kim said other kinds of investments are important to economic growth in the future, as robots displace millions of low-skill workers.

“The one thing you know for sure that you’ll need in whatever the economy looks like in the future is people who can learn,” he told the BBC.

“We want to create a sense of urgency to invest in people that we think is necessary given the way … the global economy is changing.”

The push for education and health investments comes as outlooks for economic growth improve.

IMF managing director Christine Lagarde said updated forecasts, to be released this week, were likely to be even more optimistic.

However, bankers from the IMF, World Bank and other organisations have warned that the progress is threatened by political movements that favour trade barriers, isolation, military aggression and other measures.

“If your aspirations start to rise but then there’s no opportunity it can lead to fragility, conflict, violence,” Dr Kim said. “This is the crash course we’re going down.”

Political uncertainties are increasingly behind many of the risks identified by sovereign debt analysts, said Moritz Kraemer, managing director of S&P Global Ratings, which tracks economic and political movements in dozens of countries to devise credit ratings.

The subject was also the topic of a speech by European Central Bank president Mario Draghi earlier this year.

Ms Lagarde said this month that policymakers “should not let a good recovery go to waste”.

“We know what can happen if we let the moment pass,” she said. “Growth will be too weak, and jobs too few. Safety nets will be unable to handle aging populations. Our financial system will be unprepared for future shocks.”