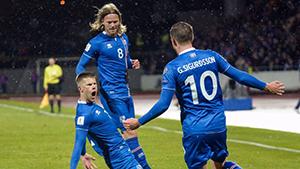 Gylfi Sigurdsson helped Iceland seal qualification for their first ever World Cup finals by scoring in an emotional 2-0 victory over Kosovo.

The Everton midfielder netted a first-half opener before Johann Gudmundsson wrapped up victory in the second period to ensure Iceland finished a superb qualifying campaign top of Group I.

Iceland only missed out on the World Cup four years ago after losing to Croatia in the play-offs but this time the country with a population of 335,000 went one step further.

They became the smallest nation to reach a major tournament at Euro 2016, where they defeated England in the last 16 before going out to France.

Now ranked 22nd in the world, Heimir Hallgrimsson’s side might fancy their chances of another surprise run in Russia, having lost only two of their 10 qualifying matches.

Croatia booked their place in the play-offs by winning 2-0 in Ukraine, cementing second place behind Iceland, while Finland‘s match with Turkey ended 2-2.

Elsewhere in Group D, the Republic of Ireland also snatched a play-off spot by edging their winner-takes-all clash with Wales 1-0.

Wales only needed a draw in Cardiff to end Irish hopes but James McClean’s driven half-volley early in the second period was enough for a dramatic victory.

Martin O’Neill’s men finished second in the group behind Serbia, who firmed up automatic qualification with a 1-0 win over Georgia after Aleksandar Prijovic’s late goal. Austria beat Moldova by the same scoreline.

The first two places in Group G were already settled ahead of Monday’s matches but table-toppers Spain ended with a 1-0 victory away to Israel thanks to Asier Illarramendi’s second-half strike.

Italy knew they would be heading into the play-offs and the four-time World Cup winners beat Albania 1-0 thanks to Antonio Candreva’s goal, while Macedonia hammered bottom-side Liechtenstein 4-0.