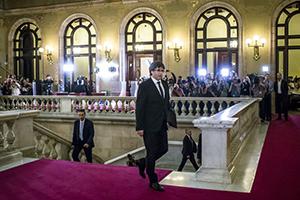 Catalan President Carles Puigdemont said that he’ll seek talks with the government in Madrid over the future of his region in Spain, rowing back from an immediate declaration of independence that threatened to turn a constitutional crisis into an economic one.

Addressing the regional parliament in Barcelona on Tuesday evening after days of tension in Catalonia, Puigdemont said the result of an Oct. 1 referendum had given him the mandate to pursue independence, but he would hold off for “weeks” for dialogue on the way forward with Prime Minister Mariano Rajoy’s administration.

Rajoy convened an extraordinary meeting of his cabinet in Madrid on Wednesday at 9 a.m. to discuss his next move, and is due to address the Spanish Parliament on the crisis in Catalonia later in the day.

“Today Mr. Puigdemont has plunged Catalonia into the highest level of uncertainty,” Spain’s Deputy Prime Minister Soraya Saenz de Santamaria told reporters in Madrid late on Tuesday. “Neither Mr. Puigdemont nor anyone else can draw conclusions from a law that doesn’t exist, from a referendum that hasn’t taken place and from the wishes of the Catalan people which it’s trying to take over.”

Pressure has piled on Puigdemont as the Spanish government and Catalan business leaders demand that he desist from pitching the region further down a path to independence that they warn would wreck the economy and tear apart Spain’s social fabric. Rajoy has consistently ruled out talks until the Catalans drop the threat of a declaration of independence that is illegal under Spanish law.

“Today I assume the mandate for Catalonia to become an independent state in the form of a republic,” Puigdemont said to cheers from the packed assembly, with Catalan police deployed around the parliament perimeter. “We propose the suspension of the effects of the declaration of independence for a few weeks, to open a period of dialogue.”

Asian stocks traded near decade highs, while the euro held gains after hitting the highest level in almost two weeks. Puigdemont suggested that the European Union should be involved in the talks, and sought to reassure companies fleeing the region.

“I think the government will possibly now act, its patience has clearly been exhausted,” Rafael Pampillon, an economics professor at the Instituto Empresa business school in Madrid, said in an telephone interview. He said Puigdemont and his supporters “are waiting and buying time” rather than retreating from independence, and Rajoy’s government “will probably look now to see if they have enough grounds to try him on the charge of sedition.”

After a year in which populist, anti-European Union forces failed to win power in elections in the Netherlands, France and Germany, the Catalan push to break away from Spain reintroduced the specter of political instability in Europe.

The Catalan leader’s speech capped days of political and economic turmoil marked by Spanish police beating Catalan citizens as they attempted to vote in an illegal referendum, and the subsequent departure of Catalan-based companies from the region as they fled the uncertainty caused by the drive toward independence.

It came at the end of a day of tension in Barcelona, where thousands of Spanish police have been stationed ready to clamp down on the separatist government. As officers from Catalonia’s own police force, the Mossos d’Esquera, secured the parliament, Puigdemont suddenly delayed his address amid reports that his own coalition partners were unhappy with the text of his speech. As Puigdemont’s lawmakers greeted him following the speech, many of them struggled to look him in the eye.

“Perhaps we have lost a chance,” Anna Gabriel, a deputy for the CUP group in the coalition, told the regional parliament. “The only way to negotiate with the Spanish state is the Catalan Republic.”

Puigdemont’s electoral coalition, Junts pel Si and CUP, signed what they termed a declaration of independence after the session outside the chamber. Junts pel Si — and not CUP — also signed a document suspending it. The regional government’s plan is to put the declaration to a vote should talks with Madrid fail.

The Catalan bid for independence has been rejected by the European Union, which says the region would not remain a member of the bloc outside Spain. French President Emmanuel Macron and German Chancellor Angela Merkel both backed Rajoy’s stance in dealing with the separatist push. In his speech, Puigdemont called for the EU to be involved in the talks with Madrid, and sought to reassure companies fleeing the region.

“He has stepped back from the brink but I’m not sure how much it solves,” said Caroline Gray, a lecturer in politics and Spanish at Aston University in the U.K. who specializes in nationalist movements. “The fundamental issue is that neither side is going to budge on sovereignty and what that means — I still can’t see how they can bridge that.” 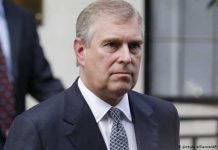