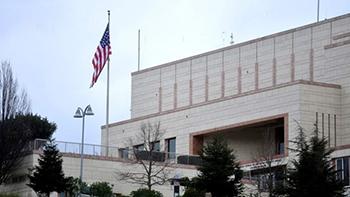 The daughter of a US Consulate staff member for whom Turkish authorities issued a detention warrant on Sunday over alleged links to the faith-based Gülen movement was detained on Tuesday, following the Monday detention of the suspect’s wife and son, Milliyet reported.

Wife S.C. and son K.İ.C. of N.M.C., who were detained in the Merzifon district of Amasya  province on Monday, were taken to İstanbul for interrogation while N.M.C. has remained in the consulate building in İstanbul.

The İstanbul Chief Public Prosecutor’s Office issued a detention warrant for N.M.C., who works in a consulate department handling issues with Turkish law enforcement. The police were unable to detain him because he has remained in the consulate building. According to the report, his wife opened a bank account at Bank Asya, which was seized in 2015 by the Turkish government over links to the Gülen movement after President Recep Tayyip Erdoğan publicly targeted it.

The US Embassy in Ankara on Sunday announced that it had suspended all non-immigrant visa services at its diplomatic facilities in Turkey.