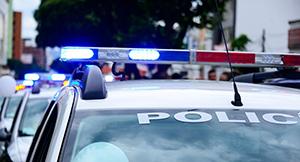 Challenging the notion that grannies and gramps are slow drivers, one 70-year-old man, channelling his inner Formula 1 speedster, squashed stereotypes as he took local cops on a high speed chase in Guilford, Connecticut, Sunday night.

According to Connecticut State Police, wannabe racer Irwin Rutchik was caught driving roughly 85 mph at 12:30 a.m. on Interstate 95, but after a police officer tried to pull the elder over, things took a turn for the epic.

Rutchik began to weave in and out of lanes as he reached speeds of 100 mph. And yet, though Rutchik actually hit a police cruiser during the chase, officers weren’t able to detain the speed racer and had to pull out the stop sticks to disable his vehicle.

No longer roaming the streets of the Constitution State, Rutchik is instead facing several charges that include reckless driving, engaging police in pursuit, interfering with an officer, following too close and failure to maintain a lane, NBC Connecticut reported.

The reckless driver is currently out on a $5,000 bond and is expected to be in court October 17.