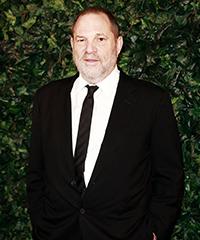 Nothing seems to illustrate this quote better than the spine-chilling audio The New Yorker released. In it, Weinstein propositions model and pageant queen Ambra Battilana Gutierrez, a woman he had allegedly already groped previously. “Don’t embarrass me in the hotel, I’m here all the time,” he tells her. “I’m not going to do anything, you’ll never see me again.” His biggest fear is embarrassment — something he repeats to Gutierrez multiple times — while her biggest fear is that he’ll do physical harm to her, not to mention inflict mental and emotional damage.

On a day when the revelations of Weinstein’s shocking behavior felt like a bomb that kept on exploding (not only are there rape allegations, but Angelina Jolie and Gwyneth Paltrow have also said that they had been harassed), we’ve found something on which we can all agree: That as much as there’s general consensus that Harvey Weinstein’s actions are absolutely appalling and abhorrent, we can’t ignore the fact that it would have taken dozens — hell, maybe even hundreds — of people to pull off such a disgusting operation for at least two decades. There will be talk about “believing women.” And sure, of course, that’s part of it. But that’s not all. What makes this story particularly chilling is that a number of these women were believed — in fact, it was an open secret in Hollywood — and still people did nothing.

Among the most shocking details from the stories are the number of people involved in covering them up.

— The New Yorker reported that Manhattan District Attorney Cyrus Vance, Jr. decided not to press charges after Harvey Weinstein was caught on tape admitting to groping Ambra Battilana Gutierrez. (You’ll also recall that Vance was paid by Weinstein’s lawyer shortly after the charges were dropped. Hmmm.)

— In the latest New York Times story, Gwyneth Paltrow — the daughter of a famous Hollywood producer and actress mother — said she was sent to a hotel room by her actual agent. Is it really possible that anyone from the Creative Artists Agency, one of the most established agencies in Hollywood, didn’t know what they were really sending her for?

— Former New York Times reporter Sharon Waxman alleges that actors Matt Damon and Russell Crowe actively torpedoed an earlier story about Weinstein’s actions that was set to come out all the way back in 2004. (Damon denies the allegation.)

— There were largely male editors and higher-ups at various publications who, it has been suggested, were either intimidated by or in cahoots with these big Hollywood entities; at the very least, they didn’t seem to make these stories a priority. As veteran news reporter Jake Tapper pointed out, there has to be a reason why NBC reporter Ronan Farrow had to publish his work in The New Yorker.

This story redefines what it means to be complicit. It wasn’t a bunch of bumbling idiots unknowingly helping a guy out; many people must have been fully aware of what they were walking these women into. But with so many people involved where to lay blame?

Once you weigh all that, a new story begins to emerge, and it’s not just one of blatant abuse of power and objectification of women.

The thing about sexual harassment and assault, is that both are ultimately about power, so the people who were complicit don’t necessarily rank on the same plane. It’s hard for an assistant or intern who witnessed something to come forward for fear of retaliation. Even actresses could be cast aside; they don’t have real power in Hollywood, and there are a million more to take the place of one who’s rejected because she’s snooping around.

There were certain pockets of Hollywood that seemed more in the dark than others, like actresses such as Meryl Streep or Judi Dench, who were older and with whom he might have had a more regular relationship. Hell, Weinstein’s plot described in the most recent media reports was so smooth, and the toxic masculine culture so insidious that the allegations include sexually harassment of women like Jolie and Paltrow, the children of powerful Hollywood royalty. And he seems to have gotten away with it . . . until now.

Once you weigh all that, a new story begins to emerge, and it’s not just one of blatant abuse of power and objectification of women: This really looks like a conspiracy, one that’s filled with powerful men protecting other powerful men and their way of life. And while this fact is hard to swallow, there’s a small silver lining: At least now it’s out in the open that women aren’t making this up.

It’s no secret that women have been long subjected to the “crazy” narrative. If a woman brings up harassment, she’s told she’s making mountains out of molehills or that she’s a rotten liar. If she tries to point to larger discriminatory practices keeping her and others like her out of higher positions or better work, she’s labeled too assertive or entitled, or she’s singled out for not playing by the system’s rules. If she thinks about speaking out against injustices like the casting couch, she’s going to find herself with a tanked career and a soiled reputation. That list goes on and on.

Unfortunately, the Weinstein story opens up a lot more questions than answers. What were assistants and people lower on the totem pole supposed to do when they saw these things happening? Even if they did speak up, would more powerful employees have done anything? Who else is the media shielding in all of this, and in what other industries? Which other powerful men are implicated? And what do we do about high-powered women who don’t advocate for other women, for fear of their own positions being taken away or degraded?

There are too many sickening details to count when it comes to this tale. But here’s one powerful thing: That conspiracy theory you think you see? You’re not making it up. It’s not all in your head. Its expanse is far greater than just one person or one company or one industry. But most important of all, you’re not crazy. And you never were. You just always knew what was really at stake.

Lily Herman is a contributing editor at Refinery29. Her work has been featured in Teen Vogue, Glamour, Allure, TIME, Newsweek, Fast Company, and Mashable. Follow her on Twitter. The views expressed are her own.