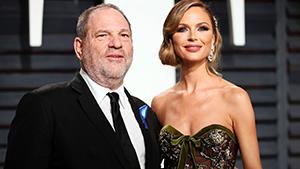 After a slew of allegations surfaced against Harvey Weinstein, accusing him of engaging in sexual misconduct with actresses and women working for his company, Georgina Chapman has announced that she is leaving her husband of 10 years.

Despite an initial statement from Weinstein earlier this week claiming that his wife is dedicated to standing by him, Chapman released a statement of her own to People explaining that she’s leaving her husband and named the recent sexual assault allegations as the cause.

“My heart breaks for all the women who have suffered tremendous pain because of these unforgivable actions. I have chosen to leave my husband. Caring for my young children is my first priority and I ask the media for privacy at this time,” her statement read.

On Sunday, Weinstein was fired from his film studio and reportedly started counseling to help him “turn over a new leaf” regarding the way he treats women. The news came on the same day that The New Yorker posted a follow up to an exposé from The New York Times in which Weinstein was accused by several women of harassing them by using his position as leverage. Three women are accusing him of rape, including filmmaker Asia Argento.