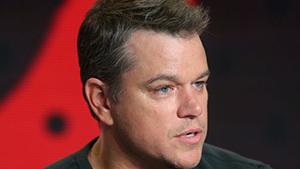 Amid more and more reports of Hollywood mogul Harvey Weinstein’s alleged inappropriate behavior with women, one A-lister is hoping to clear his name. Matt Damon has come forward to discuss reports that he helped cover up a story about Weinstein years ago.

As previously reported, former New York Times writer, and current CEO and Editor-in-Chief of TheWrap, Sharon Waxman, published a story to her site on Monday explaining that she worked on a piece for the Times in 2004 that would have addressed similar allegations of sexual misconduct by Weinstein.

Waxman claims that she discovered a woman in London who had allegedly been paid off after what she claimed was an unwanted sexual encounter with Weinstein. Waxman claimed her reporting showed the head of Miramax Italy at the time, Fabrizio Lombardo, had no real film experience and was simply there to be sure women were always available to Weinstein. The story was supposedly gutted to remove any mention of sexual misconduct after associates of the Hollywood executive, reportedly including Damon and Russell Crowe, called to vouch for Lombardo at the behest of Weinstein.

Speaking to Deadline, Damon has a much different recollection of the events in question.

“My recollection was that it was about a one minute phone call. Harvey had called me and said, they’re writing a story about Fabrizio, who I knew from ‘The Talented Mr. Ripley.’ He has organized our premiere in Italy and so I knew him in a professional capacity and I’d had dinner at his house,” Damon explained. “Harvey said, Sharon Waxman is writing a story about Fabrizio and it’s really negative. Can you just call and tell her what your experience with Fabrizio was. So I did, and that’s what I said to her. It didn’t even make the piece that she wrote.”

Damon goes on to explain that he was never aware that the story he was commenting on had anything to do with sexual misconduct at the time, and he says that he was not among the numerous celebrities now claiming that they knew something about Weinstein’s actions prior to the recent exposé by the Times.

“I did five or six movies with Harvey. I never saw this. I think a lot of actors have come out and said, everybody’s saying we all knew. That’s not true,” Damon told Deadline. “This type of predation happens behind closed doors, and out of public view. If there was ever an event that I was at and Harvey was doing this kind of thing and I didn’t see it, then I am so deeply sorry, because I would have stopped it.”

The star emphasized he made the phone call Weinstein requested him to make because he simply thought he was speaking up for the professional work of Lombardo.

“For the record,” he concluded. “I would never, ever, ever try to kill a story like that. I just wouldn’t do that. It’s not something I would do, for anybody.”