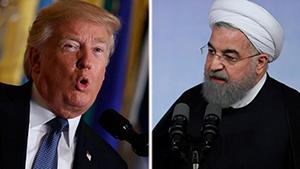 Angry at the options he was presented with last July when he reluctantly agreed to certify to Congress that Iran was in compliance with the 2015 nuclear deal (the JCPOA), President Trump demanded another option for his next certification decision due by October 15.

He didn’t get it. Instead, the president’s national security advisers – led by National Security Adviser H.R. McMaster and Secretary of State Rex Tillerson — have presented him with two absurd options to “decertify” the JCPOA but to keep the United States in this deeply flawed agreement.  These options are so bad that they are best described as “dumb” and “dumber.”

Mr. Trump’s advisers also refused to present him with a thoughtful Iran deal exit strategy drafted by Ambassador John Bolton or to let Bolton meet with the president to brief this option.  After he was blocked from meeting with the president, Bolton published this option in National Review.

Under the dumb option, Mr. Trump would decertify the JCPOA, remain in the agreement to fix it later and Congress would reimpose sanctions lifted under the nuclear agreement.  Congress would act under provisions of the Coker-Cardin Act which allow expedited consideration of taking such action over a 60-day period.

The middle ground that these options supposedly represent is an illusion – their sole purpose is to ensure that President Trump never withdraws from an agreement he has correctly called an embarrassment to the United States.

This dumb option has two huge problems.  First, there is zero chance Iran will agree to any changes to the nuclear deal or give back the huge concessions it extracted from Secretary of State John Kerry.  Second, it appears that moderate Senate Republicans will side with Democrats to block passage of any sanctions that could endanger the Iran deal.

The dumber option – unfortunately, the top option of Trump’s advisers – calls for President Trump to decertify, remain in the agreement, and to not impose any additional sanctions.  The purpose of this option is to end the requirement that the president certify the agreement to Congress every 90 days and postpone imposing new sanctions to give U.S. diplomats a chance to fix the JCPOA and convince Iran to agree to changes.

This is a dumber option because it is exactly what the Obama administration wanted and what Hillary Clinton would have pressed for if she had won the election: protecting the JCPOA by dropping the prospect of new sanctions, doing away with the certification requirement and answering criticism of the deal by engaging in endless talks with Iran and European diplomats to fix the agreement.

Iran deal supporters mostly want the U.S. to remain in the agreement because they claim Iran is in compliance and a U.S. withdrawal would alienate America’s European allies.

The “we must avoid alienating European leaders” argument is unlikely to sway Mr. Trump since he proved by his decision to withdraw from the equally flawed Paris Climate Accord that he rightly believes Europe does not have a veto over U.S. foreign policy or his decisions as president.

Many disagree Iran is in compliance with the JCPOA, including Senators Tom Cotton, R-Ark., Ted Cruz, R-Texas, David Perdue, R-Ga., and Marco Rubio, R-Fla., who spelled out major instances of Iranian noncompliance and cheating in a July 11, 2017 letter to Secretary of State Tillerson.  The senators noted in their letter that Iran refuses to allow inspections of military sites and reports by German intelligence of Iranian cheating.

Making this worse, IAEA Director Amano made a stunning revelation in a late September Reuters interview that the IAEA is unable to verify Iran is implementing the JCPOA because it does not have the means to ensure that Tehran has not engaged in activities that “could contribute to the development of a nuclear explosive device.”

Under the dumb and dumber options being promoted by McMaster, Tillerson and other Trump advisers, this farcical situation will continue as the United States remains in the nuclear deal while engaging in pointless talks begging the Iranians for a better one.  The middle ground that these options supposedly represent is an illusion – their sole purpose is to ensure that President Trump never withdraws from an agreement he has correctly called an embarrassment to the United States.

President Trump’s upcoming decision on how he will deal with the dangerous and flawed nuclear agreement is a moment for moral clarity and may be a defining moment of his presidency.  There is only one reasonable and moral option: a clean withdrawal using the Bolton plan.

Finally, President Trump also must send a message to his national security advisers by soundly rejecting the dumb and dumber Iran deal options they presented.

Fred Fleitz is senior vice president for policy and programs with the Center for Security Policy, a national security think tank. Follow him on T[email protected].