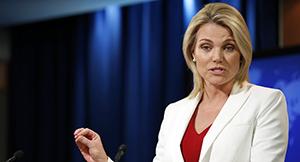 The United States is very disappointed by the arrests of locally employed personnel of its diplomatic mission in Turkey and expects from Ankara to allow the detained employees access to their attorneys.

WASHINGTON (Sputnik) — The Turkish government should allow US embassy staff it detained access to attorneys, US Department of State spokesperson Heather Nauert said during a press briefing on Tuesday.

“I think a good start would be to allow them access to their attorneys,” Nauert said when asked what the United States expects from the Turkish government before resuming visa services between the two countries. “To our knowledge they [detained US embassy staff] have not had access to legal counsel as of this point.”

On Sunday, the US embassy announced the suspension of non-immigrant visa services at the US diplomatic facilities in Turkey over the recent arrest of an employee of the US Consulate General in Istanbul. In response, Turkish authorities decided to suspend US visa applications.

Nauert said one of the individuals arrested was assigned to strengthen law enforcement cooperation between the US embassy and the local police.

The spokesperson also confirmed that a third employee of the US embassy was apprehended by Turkish authorities, however, the United States is not aware if the individual was arrested or just questioned.

According to Turkish media, Metin Topuz has been accused by the country’s authorities of undermining the constitutional order, espionage and an attempt to overthrow the Turkish government.

On Thursday, the US Embassy in Turkey said that the charges against Topuz were baseless and undermined partnership between Washington and Ankara.