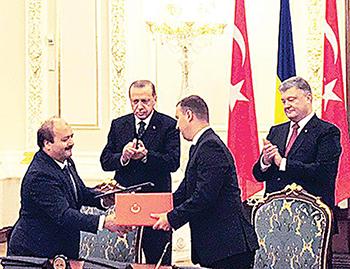 Turkey’s leading defense company Aselsan has signed a multimillion-dollar contract in Ukraine to supply a communications systems, the firm said on Oct. 10.

The contract for the communications systems is worth $43.6 million, Aselsan said in a statement.

Deliveries under the agreement will be made in 2018, it added.

During a visit by Ukrainian Prime Minister Volodymyr Groysman to Turkey in March, a memorandum of understanding between the Turkish Undersecretariat for Defense Industries (SSM) and the Ukrainian state industrial enterprise Ukroboronprom was signed.

It was during the visit that Ukrainian state foreign trade enterprise Spets Techno Export was confirmed as the other partner in the Aselsan deal.

Another memorandum of understanding was signed between SSM and Ukroboronprom for the “development and production of aircraft and composite materials” at the 13th International Defense Industry Fair in May this year.