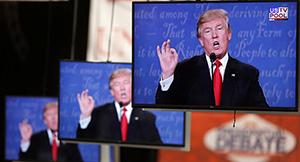 The Wall Street financial analyst Charles Ortel told Sputnik that the US and elite global media, as well as many academics around the world, hate and fear US President Donald Trump because his reform policies threaten their own interests.

WASHINGTON (Sputnik) — Trump’s crusade against fake news has been ongoing since his presidential campaign, when the first claims in US media emerged that Russia was allegedly trying to help the Republican candidate make his way to the Oval Office.

Among the media outlets slammed by the president for fake news reports include The New York Times, The Washington Post, CNN, NBC, ABC and CBS.

Ortel, a former executive at financial firms Chart Group and Dillon, Tead & Company, said the owners and senior executives of almost all the major US news outlets saw Trump as a major challenge to their continuing power and prestige.

“Trump and his team threaten their cozy status quo: It is much easier to trade in gossip with crooked politicians and bureaucrats, then to confront underlying reality in our radically changing time,” Ortel said.

The US media enjoyed comfortable close cooperation with the political establishment in Washington and showed no interest or concern in the free trade policies that had destroyed scores of millions of well-paying manufacturing jobs across the United States, Ortel explained.

“Protected by public sector unions (and tenure), globalist media and academia work hand in hand with mainstream political hacks who, until Trump, rested secure and happy in swamps spread around the world, just as swampy as Washington, DC,” he said.

Trump was proud of his outsider status in Washington, but this further angered the media elite who recognized that he did not care to even socialize with them, Ortel pointed out.

“If one lives in the swamp and has to socialize with swamp creatures, one can have difficulty siding with a team that is determined to drain, bulldoze and then pave over one’s home!” he said.

The US mainstream media operated in an industry prone to embracing what came to be known as “globalism,” and they paid no attention to the economic consequences of the policies they supported, Ortel observed.

“Journalists tend (with exceptions) to be facile writers but are mostly horrible with numbers. So the rat pack of marquee names in media is easily seduced by academic ‘experts’ who also find ‘globalism’ seductive,” he said.

The globalist agenda favored the well-connected international elite while leaving national populations, including in the United States, out in the cold to pay the price for their dubious policies, Ortel noted.

“These academics and the brand-name suite of universities are prime beneficiaries of connected families, especially those who network at global gatherings to put together investment deals in industries including telecommunications, energy, mining, and construction,” he said.

However, in reality, the free trade, open borders agenda championed by the US media elite was based on entirely false assumptions, Ortel commented.

“The truth is that ‘globalism’ is nonsense — fewer than 20 percent of all nations on earth are responsible for an overwhelming majority of economic activity,” he said.

Large corporations imagined that by expanding into multinational giants they would become more dominant and profitable, but instead the global communications revolution of the past 20 years had left them vulnerable to far smaller companies with much lower overheads, Ortel recalled.

“Particularly since 1998 after broadband internet use took hold, experience in the private sector shows that bigger organizations are at grave risk from disrupting upstarts that can move swiftly and do not have baggage including aging plants, offices and unions,” he said.

Yet, in the public sector and in academia, most nations remained wedded in last millennium practices, Ortel warned.

Ortel in 2007 exposed financial fraud at the US conglomerate General Electric and has also investigated allegations of fraudulent conduct by the Clinton Foundation.