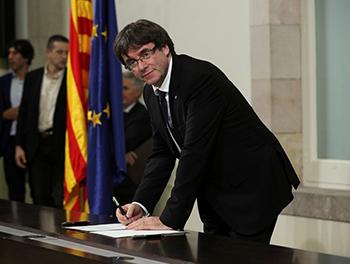 Between the region’s current status, and full independence, there’s little space for compromise.

Want to receive exclusive insights from The Atlantic—while supporting a sustainable future for independent journalism?  Join our new membership program, The Masthead.

Catalonia has its own language, its own identity, and a culture distinct from that of the rest of Spain. Under Spanish law, it also has its own president, its own parliament, and its own police force. The October 1 referendum in which Catalans voted overwhelmingly for independence from Spain (turnout was 43 percent amid a massive, sometimes violent crackdown by Spanish authorities) was intended to turn this de facto separateness into something more formal. As Madrid watched in dismay, threatening Catalan leaders with arrest or worse, Carles Puigdemont, the Catalan president, signed Tuesday a declaration of independence for Catalonia, but said its implementation would be delayed so “that in the coming weeks we can undertake a dialogue” with the government in Madrid.

Madrid has already made its views on dialogue known. Mariano Rajoy, the Spanish prime minister, rejected talks unless the idea of Catalan independence is first abandoned—a non-starter for the present Catalan government. Madrid has also threatened to disband the Catalan parliament and charge Puigdemont and his political allies with sedition because their actions violate the Spanish constitution. Meawhile, there have been calls for mediation from Kofi Annan, the former UN secretary general, as well as a public plea from Donald Tusk, the president of the European Council, for Puigdemont not to take steps that would make dialogue impossible.

But what would any mediation with the Spanish state achieve for Catalonia, a region that already enjoys broad autonomy? What space is there between independence and the status Catalonia already has?

Peter Ceretti, an analyst for Spain and Portugal at the Economist Intelligence Unit, told me it’s highly unlikely there will be any talks between the two sides soon in the first place. “Mariano Rajoy, up to this point, has ceded nothing and has been unwilling to negotiate with the nationalist camp,” he said, adding that, in his view, any dialogue is likely only after the next Spanish election (scheduled for 2020) or after the realignment of of political forces at the national level.

“If there were eventually to be a negotiation with the central government … I think what the Catalans would be angling for would be some of the things that were written into their regional statute in 2006 that were then modified by the Constitutional Court,” he said.

Ceretti was referring to a decision in 2010 by the country’s Constitutional Court, which, among other things, struck down attempts in 2006 to place the Catalan language above Spanish in Catalonia, and diluted references to “Catalonia as a nation.” Catalonia has previously also called for some sort of fiscal arrangement with Madrid, of the kind enjoyed by the Basque country and Navarre. Both these regions collect their own revenue and give a negotiated share to the central government, unlike Catalonia, where Madrid controls tax revenue. Catalan leaders also want some sort of binding referendum that the government in Madrid agrees to—like the one the one conducted by Scotland in 2014 with London’s blessing. Madrid does not recognize Catalonia’s recent referendum, which the Spanish Constitutional Court declared invalid before it was held.

But, Ceretti pointed out: “All of these things are very difficult to sell at this point. What they [the Catalans] are most likely to get, if negotiation does ensue at some point in the near future, is a better fiscal settlement and perhaps some flexibility on linguistic privileges, and the recognition of the Catalan nation, but a binding referendum is a hard sell.”

But none of these steps are provided for in the Spanish constitution, so any such compromise would have to be accompanied by constitutional amendments. This means, Ceretti said, that “there would have to be a very broad consensus on these things among parties at the national level. And that just doesn’t seem to be there.”

Spain has left open the door to a compromise, however, saying it might be open to adopting the kinds of fiscal reforms—of the kind enjoyed by the Basque country and Navarre—that it rejected in 2012, as the country was trying to recover from the global financial crisis.

“Catalonia already has a great deal of autonomy, but we could talk about a reform of the funding system and other issues,” Luis de Guindos, Spain’s economy minister, told the Financial Times. He added: “In 2012 it was in the middle of the crisis and our focus was on avoiding a bailout of Spain … but now the situation has changed, we have more fiscal space, we have a recovery, and that opens new opportunities for discussion.”

The first condition for that discussion, though: “Once independence plans are dropped, we can talk.”

Puigdemont’s speech Tuesday, followed by his signing of the declaration of Catalan independence, could make that “discussion” more difficult—if not impossible for the time being. Spanish state TV reported that Rajoy would chair a Cabinet meeting Wednesday to decide whether to apply Article 155 of country’s constitution and suspend Catalonia’s autonomy—which would put the territory’s independence ambitions even further out of reach.