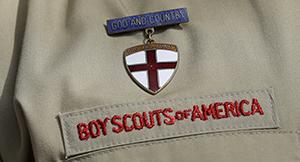 Making its announcement on the International Day of the Girl, the Boy Scouts of America revealed Wednesday that it will begin to accept girls in its troops.

Citing a desire to build female leaders, Michael Surbaugh, the club’s chief scout executive, wrote in a statement that the initiative was also carried out to “evolve how our programs meet the needs of families.”

“We strive to bring what our organization does best — developing character and leadership for young people — to as many families and youth as possible as we help shape the next generation of leaders,” Surbaugh wrote.

The change, effective in 2018, will still see groups segregated by gender but will give existing groups the choice of creating a new girl pack, establishing a pack consisting of girl dens and boy dens or remaining an all-boy pack.

“The BSA’s record of producing leaders with high character and integrity is amazing,” Randall Stephenson, BSA’s national board chairman, said in a statement. “I’ve seen nothing that develops leadership skills and discipline like this organization.”

“It is time to make these outstanding leadership development programs available to girls,” Stephenson added.

​Striking fear into the souls of many, the Wednesday announcement triggered backlash from a slew of netizens — as a user called ‘MAGA Gary’ warned, destroying the “customs and culture,” presumably of the US, presumably through children’s clubs, will “destroy the nation.”

​Even a certain Junior got in on the action.

​But that’s not all, folks. Two months ago the Girl Scouts of America weren’t thrilled about the notion either.

According to Kathy Hopinkah, the president of the girls club, the BSA’s decision is simply a “covert campaign to recruit girls” since the organization was dealing with a declining membership.

“I formally request that your organization stay focused on serving the 90 percent of American boys not currently participating in Boy Scouts,” Hopinkah wrote back in August.

The Boy Scouts of America reports having roughly 2.3 million members between the ages of seven and 21; however, the BBC reports that the club’s recent numbers have declined by roughly one third since 2000.