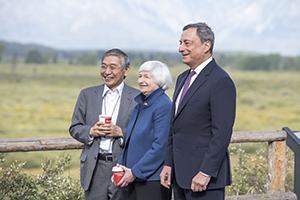 With their $21.5 trillion in assets, central banks have effectively manufactured the world’s biggest economy.

The Federal Reserve keeps talking about a “return to normal” in monetary policy. The media must buy into it, because it keeps repeating the phrase. Many investors buy into it, too. After all, it is the high and mighty Fed speaking. This “normal” is defined by interest rates, but interest rates are defined by the economics that surround them.

Interest rates do not exist in a vacuum. But since we are in an economic environment never before seen in history, where data compiled by Bloomberg show that central banks have amassed $21.5 trillion in assets, how can there possibly be any notion of “normal?” Nothing in history supports the claim. Without a history, “normal” is a meaningless term.

Think about it: In response to the financial crisis, central banks have essentially manufactured in just nine years an economy that is bigger than the gross domestic products of either the U.S. or China. I am more than willing to recognize the accomplishment, but to call it “normal” is either a ruse or the height of foolishness. There is nothing “normal” about it. Some may say it is the “crown of creation,” and a case can be made for this argument, but it is not a crown that was ever seen before.

This is why, when assessing financial markets, I keep pointing at the money. It is the giant amount of manufactured capital that is holding interest rates down, pushing equities up and compressing all risk assets against their sovereign benchmarks. It isn’t inflation or housing data or wages or any other piece of data that can be singled out. Those are, by comparison, flyspecks in the wind.

Simply put, all that money has created demand that outstrips the current supply in bonds, in equities, in stock price-to-earnings multiples, in historical risk valuations and in credit assets. Therefore, the economic environment that underlies asset pricing is, in fact, distorted. The Fed’s claim of some sort of “normalcy” is a charade. Fed Chair Janet Yellen can say it, and so can Fed governors and presidents, but there is not one grain of truth in the telling. It is nothing more than mumbo-jumbo because they do not wish you to recognize what is actually happening. They have taken over markets and now totally control and dominate them, regardless of the usual day-to-day antics.

I never thought Yellen would be given the nod for another term as the Fed chair. She doesn’t exactly, or even remotely, fit into what President Donald Trump desires for the Fed. Higher interest rates, pushed for no good reason, aren’t user-friendly for Trump’s “Make America Great Again” schematic. The current Fed, and its policies, are a relatively short-lived affair now.

In the Wall Street Journal you will find another possible reason for Yellen’s exit. It is a story that bears watching because it is potentially explosive. The Journal reports that “The Federal Reserve’s internal watchdog is probing a group of Fed economists who also own shares in a U.K. economic-forecasting company. The inquiry, by the Fed’s Office of Inspector General, centers on four economists who also have owned shares in London-based Now-Casting Economics Ltd.” Fed regulations state that employees “should avoid any situation that might give rise to an actual conflict of interest or even the appearance of a conflict of interest.”

It is also interesting to note, when considering the Fed’s minuscule plan to start trimming its $4.5 trillion balance sheet this month, what is going on at the world’s other major central banks. They are not decreasing their holdings, but rather continue to increase them. Switzerland and Japan are engaged in massive amounts of equity purchases while the European Central Bank continues on with its sovereign and corporate bond buying operations. In fact, the ECB’s “Corporate Sector Purchase Program” stands at $136.8 billion, according to Bank of America, with 25 percent of it targeting German companies. No surprise there.

What I find particularly interesting is an observation from research firm CreditSights. They contend that the corporate bonds owned by the ECB yield 15 basis points less than the average European corporate bond. Here’s a new game for you: buy what the ECB is buying and reap the rewards. Not a game for me, mind you, but perhaps someone wants to play? Real-life Monopoly, if you will.