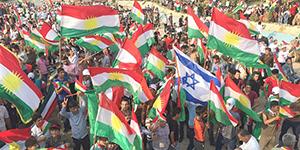 Iraqi Kurdistan’s recent referendum on whether to declare independence from Baghdad garnered only slight attention in the US. Even the overwhelming vote (93 percent favored independence) and America’s long involvement in the region did not make the story more prominent.

Nonetheless, we would be badly mistaken to underestimate its importance for US policy throughout the Middle East.

Protecting American interests in that tumultuous region has never been easy. Not only does Iran’s nuclear-weapons threat loom ever larger, but the struggle against terrorism, whether from Hezbollah, ISIS, al-Qaida or any number of new splinter groups, seems unending.

Less visible but nonetheless significant forces are also at work. Existing state structures across the Middle East are breaking down and new ones are emerging, exacerbating the spreading anarchy caused by radical Islamic terrorism. Non-ideological factors such as ethnicity and cultural differences are enormously powerful and best understood as movements in the region’s “tectonic plates,” stirring beneath the surface of the more apparent threats of terrorism and nuclear proliferation.

This week, President Donald Trump is expected to speak about Iran — specifically, the fate of the Iran deal (JCPOA). The American Jewish Committee…

None of these tectonic plates has more immediate implications for America’s Middle East policy than the Kurdish people’s long-standing determination to have their own nation-state. Modern-era Kurdish aspirations for statehood emerged during the Ottoman Empire’s post-World War I collapse, as European powers redrew the region’s map. The Kurds were unsuccessful in pressing their case, however, and their lands were split among Turkey, Iraq, Iran and Syria.

Nonetheless Kurdish longing for a separate state never dissipated, leading to considerable conflict, most visibly in Turkey. The West largely was unsympathetic in recent years because separatists in Turkish Kurdistan channeled their major efforts through the Marxist Kurdistan Workers’ Party. Obviously, during the Cold War, Washington and the West generally had no interest in weakening Turkey and its critical geostrategic role as NATO’s southeast anchor against Soviet adventurism.

Outside Turkey, however, especially in Iraq, Kurds played a much more constructive role, helping the United States in both Persian Gulf wars.

Iraq’s Sunni Arabs were also unwilling to be ruled by a Baghdad regime dominated by Shia adherents, who were little more than Iranian puppets. The rise of ISIS in Iraq occurred in part from this hostility, just as in Syria, ISIS capitalized on the anti-Assad feelings of Sunni Arabs, who felt excluded and oppressed by the dominant Alawite elite in Damascus.

With the destruction of the ISIS caliphate in Syria, the question of what comes next is unavoidably before us. The United States needs to recognize that Iraq and Syria as we have known them have ceased to exist as functioning states. They are broken and cannot be fixed.

This disintegration reflects the Middle East’s broader, spreading anarchy, and it provides the context for Kurdish Iraq’s overwhelming support for independence from Baghdad.

I have previously suggested that disaffected Sunni Arabs in Iraq and Syria might combine to form their own secular (but religiously Sunni) state, which the Gulf Arabs could help support financially. Indeed, while substantial issues remain about allocating the Iraqi cities of Mosul and Kirkuk between Kurds and Arabs, the Kurds themselves are largely Sunni, which suggests considerable confluence of interest with their Arab fellow Sunnis. Helping a new Kurdistan and a new Sunni state might overcome the current split among the Arabian peninsula’s oil-producing monarchies and focus their attention on Iran, the real threat to their security.

Unfortunately, but entirely predictably, our State Department opposed even holding the referendum and firmly rejects Kurdish independence. This policy needs to be reversed immediately, turning US obstructionism into leadership. Kurdish independence efforts did not create regional instability but instead reflect the unstable reality.

Recognizing that full Kurdish independence is far from easy, these issues today are no longer abstract and visionary but all too concrete. This is no time to be locked into outdated strategic thinking.

John Bolton, a senior fellow at the American Enterprise Institute, was the US permanent representative to the United Nations and, previously, the undersecretary of state for arms control and international security.

This article was originally published by the Pittsburgh Tribune Review.