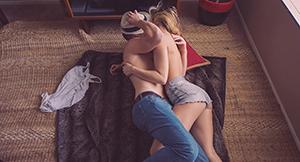 Mistakes happen all the time, but one social media guru made an epic error when she accidentally streamed herself having sex with her boyfriend.

Kristen Hancher, a Los Angeles-based Instagram model, was getting hot and heavy with her beau, Andrew Gregory, when someone accidentally hit the record feature on Instagram. With the phone facing down nothing was actually seen, but things were definitely heard.

Turns out a whopping 14,000 viewers tuned in to listen to the reportedly three-minute encounter between Hancher and Gregory.

​After coming to and realizing what happened, the 18-year-old immediately removed the post from her InstaStory. Moments later Hancher released an apology for the accidental post.

“Whoever saw my live, I just wanna apologise; that was totally NOT intentional. Delete it from your mind,” the Instagram-famous personality wrote. “That was super embarrassing and super uncomfortable.”

And yet, while most people would run to hide under a rock, Hancher refused. Fessing up, she instead told fans that she was going to act like it never happened and move on.

“But for real, guys, sh*t happens. Accidents happen. You have to move on and pretend like it never happened and go on with your life. That’s what I’m gonna do.”