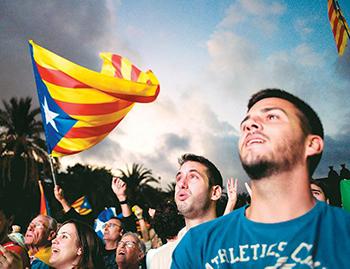 Spanish Prime Minister Mariano Rajoy demanded on Oct. 11 that the Catalan leader clarify whether he has declared independence, issuing a veiled threat that the central government could limit or rescind the region’s autonomy if he has.

He said the Catalan government’s response would be crucial in deciding “events over the coming days.

”It is the first time that Rajoy has openly said that Article 155 of the Spanish constitution will be the next step taken by the government if Catalan authorities don’t backtrack.

He said the government “wants to offer certainty to citizens” and that it is “necessary to return tranquility and calm.”

Rajoy issued the demand after a special Cabinet meeting to respond to an announcement from the head of the Catalonia region, Carles Puigdemont, that he was proceeding with a declaration of independence but was suspending it to facilitate negotiations.

Earlier, Rajoy vowed to do everything in his power to prevent the region’s independence.In a parliamentary speech that left many confused, Puigdemont immediately called for Catalonia’s independence to be suspended to allow for negotiations with the central government.

At stake is the future of a region of 7.5 million people deeply divided over independence, one of Spain’s economic powerhouses, whose drive to break away has raised concern for stability in the European Union.

Crowds of thousands gathered outside the parliament building in Barcelona late on Oct. 10, waving Catalan flags and banners screaming “democracy” in the hope of witnessing a historic night in a region that remains deeply divided over independence.

But Spain’s political establishment rounded on Puigdemont following his declaration, and support among separatists in Catalonia was mixed.

The government stuck to its stance that it would not accept mediation or any talks until Catalan leaders drop their independence bid.

She said Puigdemont was “a person who doesn’t know where he is, where he’s going or with whom he wants to go.”

Puigdemont’s address “was frankly trickery, once more, their ruses in order to have things both ways,” Dastis told French radio Europe 1.

“He’s doing what he’s always done, going down a path that will lead to situations we don’t want to see in Catalonia in terms of economic and social clashes. He says they won, presume they have the right to independence after the result of this so-called referendumi, then asks parliament to suspend the effects of this declaration,” he said.

“It’s a shocking way to treat their own parliament,” he added. Following his declaration to parliament, Puigdemont and his allies signed an independence declaration outside the chamber, but its legal validity was unclear.

Spain and Catalonia now enter into the unknown, as Madrid has repeatedly said independence is not up for discussion.

Catalonia pressed ahead with an independence referendum on Oct. 1 that the central government said breached Spain’s constitution.

Spanish police cracked down on the polls, beating some voters as they closed down polling stations.

Around 90 percent of those who cast ballots voted for independence but the poll was poorly monitored and many Catalans opposed to secession boycotted it.

Demands for independence in Catalonia, which has its own language and cultural traditions, date back centuries.

But a 2010 move by Spain’s Constitutional Court to water down a statute that gave Catalonia additional powers, combined with a deep economic meltdown in Spain, sparked a surge in support for independence.

Meanwhile Spain’s ambassador to France, Fernando Carderera, told French radio RTL that Puigdemont’s announcement was tantamount to a “coup d’etat [except that] you don’t have scenes of people going into parliament with guns.”

As for the suspended independence declaration, Carderera said: “You can’t suspend something that doesn’t exist. Independence is like being pregnant, either you are or you aren’t.”

France has been outspoken in its support of the Madrid government during the crisis, with President Emmanuel Macron charging on Oct. 10 that the separatists were motivated in part by “economic selfishness.”

“If there were a declaration of independence it would be unilateral and it wouldn’t be recognised,” Loiseau said on CNews digital news channel.

“This crisis needs to be resolved through dialogue at all levels of Spanish politics,” she urged.

The minister also reiterated Brussels’ warning that an independent Catalonia would “automatically” be out of the EU and have to reapply to join.

Another EU country to oppose Catalanoian independence was Germany, with German Foreign Minister Sigmar Gabriel saying on Oct. 11 that the region’s efforts to seek independence could only be solved through talks based on the Spanish constitution.

“A unilateral declaration of Catalonian independence would be irresponsible,” Gabriel said in a statement.

“A solution can only be found through talks on the basis of the rule of law and within the framework of the Spanish constitution.”

“The Commission is following closely the situation in Spain and reiterates its earlier call for full respect of the Spanish constitutional order,” Commission Vice President Valdis Dombrovskis told a news conference.

“We are supporting efforts to overcome division and fragmentation, to ensure unity and respect of the Spanish constitution,” he added.