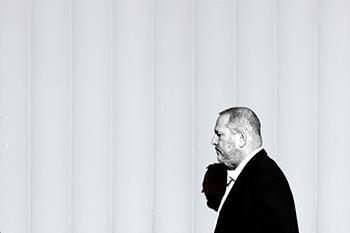 When others might go to prison, powerful people go to rehab.

Some people go to prison, and others go to rehab. Deposed Hollywood plutocrat Harvey Weinstein is reportedly going to rehab. On Tuesday, TMZ said Weinstein was en route to “a rehab center in Europe” to address “sex addiction.”

“We’re told Weinstein still believes he can get help, come back, and make a fresh start,” the site reported. “As a source close to Weinstein put it, ‘He wants to come back with fresh, new ideas.’”

After decades of both alleged and admitted patterns of abusive and coercive behavior, the 65-year-old Weinstein appears to be seeking a do-over. Though he hasn’t publicly confirmed it, he alluded to this last week in a postmodernist mea culpa, in which he misquoted Jay-Z and condemned the NRA and also conceded, “I appreciate the way I’ve behaved with colleagues in the past has caused a lot of pain, and I sincerely apologize for it. Though I’m trying to do better, I know I have a long way to go.”

Weinstein posed the conflict as a sort of infection that could be eradicated: “My journey now will be to learn about myself and conquer my demons.” In doing so, he managed to downplay his own agency in harboring or cultivating these demons. He appeared to have taken a note in exculpation from Phil Hartman’s character unfrozen caveman lawyer: “I came of age in the ’60s and ’70s, when all the rules about behavior and workplaces were different.”

The implication was that standards of decency and professionalism had shifted beneath his feet, and he is a naïve old dinosaur who can’t help how much he loves sex. The answer, apparently, is an (admittedly overdue!) jaunt to rehab for “sex addiction.” Then back with more ideas soon.

The ability to even attempt to sell this narrative is a luxury disproportionately afforded to powerful men—the ones who are not thugs or violent criminals but simply can’t help themselves.

The known facts are at odds with Weinstein’s moment-of-realization story. Weinstein reportedly met with resistance regularly from the people he attacked and people close to them. He was reportedly confronted years ago privately by Brad Pitt and Ben Affleck. He has paid multiple settlements. He has been mocked publicly at the Oscar nominations and on 30 Rock and Entourage. The problem was not new or unknown, and yet it was last week’s revelation that he considered “a wake-up call.”

The framing of Weinstein’s problem as one to do with sex reflects no reckoning with the nature of the charges.

The more glaring problem with the narrative is the mischaracterization of the incidents as “sexual”—and an addiction to that sex. “Sex addiction” is not included in psychiatry’s Diagnostic and Statistical Manual, as the American psychiatric establishment chose to regard sex differently from other addictive behaviors—largely in that there are no serious physical symptoms of withdrawal. This is a consequential distinction. People can have problematic sex-related compulsions that interfere with daily life, but that’s different. For example, in a very real sense, a person approaching the lethal stages of alcohol withdrawal may rob a liquor store to save his life. This would not be the moral equivalent of raping a person to stem an onset of “sex withdrawal.”

Even for the minority of mental-health experts who would characterize sex addiction as a diagnosable condition, the fact remains that sex is simply not the issue at hand.

The acts detailed in the accounts of the many women reporting abuse by Weinstein were often tangentially sexual, in that they involved certain parts of the body and mimicked the motions of sexual acts. But to consider these incidents sex is a mode of thinking that fell out of use even before the “’60s and ’70s.” Sex is defined by consent. This is not a new concept.

The framing of Weinstein’s problem as one to do with sex reflects no reckoning with the nature of the charges. This is a case of excusing something as sex when it is not sex. There are parallels in this misdirection to what happened with the Access Hollywood tape in which Donald Trump bragged about assaulting women, and it was reported in the news as “explicit sex talk.”

These are rather problems of power and status that manifest as a violent disregard for others—a failure to acknowledge the autonomy of women or a problem accepting it and a compulsion to revoke it by force. So it feels especially jarring to hear that same person professing a lack of agency in these acts.

There is a serious role for counseling and rehabilitation, cognitive therapy and introspection in a criminal-justice case of this sort—and many others. The case of Weinstein, though, casts a spotlight on the disparities in access to these approaches, and the people for whom they are considered acceptable and sufficient penance.

For example, juvenile offenders of all sorts—most of whom are charged with minor offenses like “disorderly conduct” and who might benefit most from a rehabilitative approach to justice—are often given a purely punitive sentence. This leaves the underlying issue at the core of the behavior—an unsafe home, or an unmet basic need, or a lack of reliable adult role models—unaddressed. A single offense becomes a second and a third, and then a life in and out of prison.

Meanwhile, those who violate others with impunity are best positioned to sell their own victim narrative. Weinstein and other powerful admitted serial offenders are often given every opportunity to change—years of warnings and settlements and threats—and have every conceivable financial resource available to make that change happen, and yet don’t. Even after a landslide of allegations finally becomes public, these people have the gall not simply to ask for another chance, but to declare it, through a demand on the sensitivity of a public for the suffering of a person battling addiction.

If there is diagnosable compulsion on display in this case, it seems to be an inability to hold oneself accountable. In such cases, systems exist to do that.