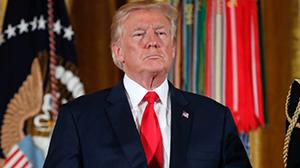 As the president threatens to crack down on unfriendly news outlets, many conservatives say their goal is to “destroy” the mainstream media.

President Trump’s latest call for a First Amendment-defying crackdown on the American press began, as they so often do, with a morning venting session on Twitter.

“Fake @NBCNews made up a story that I wanted a ‘tenfold’ increase in our U.S. nuclear arsenal. Pure fiction, made up to demean,” Trump tweeted Wednesday morning. Ten minutes later, he followed up with a proposed solution: “With all of the Fake News coming out of NBC and the Networks, at what point is it appropriate to challenge their License? Bad for country!”

By the afternoon, Trump’s media bashing had migrated to the Oval Office, where, sitting next to Canadian Prime Minister Justin Trudeau, the president again tore into NBC News for its “fake” story. “It’s frankly disgusting the way the press is able to write whatever they want to write,” Trump said, without irony. “And people should look into it.” And by Wednesday night, his earlier suggestion about challenging networks’ licenses had morphed into a demand: “Network news has become so partisan, distorted and fake that licenses must be challenged and, if appropriate, revoked,” the president wrote on Twitter. “Not fair to public!”

Public riffs targeting the press are nothing new for Trump. He has made little secret of his deeply felt dislike for the Fourth Estate—and, in fact, his hyperconfrontational attitude toward the mainstream media was one of the things that first endeared him to Republican primary voters.

But while Trump is often the one who gets the blame (or credit) for today’s dramatically escalated culture war on the press, the roots of these attacks go much deeper. As I wrote in a new essay for the fall issue of the Columbia Journalism Review,  the history of modern Republican politics is rife with examples of conservatives—from Barry Goldwater to Sarah Palin—working to discredit journalism.

But for most of the past half-century, conservatives have at least claimed their press criticism was aimed at spurring reform. “We all know that you can’t live in a free country without a free press,” Fox News contributor Bernard Goldberg told host Bill O’Reilly in 2012. “But you know what else? You can’t live in a free country for long without a fair press. We need a strong mainstream media. That’s why you and I criticize it.”

In the Trump era, that pretense has been dropped. With the rapid growth and rising influence of the conservative-media complex, most on the right seem to have given up on trying to “fix” the mainstream press. And many of the powerful figures in that world now openly declare that they are working to bring about the demise of the nonpartisan journalistic establishment in America.

Matt Boyle, the Washington editor for Breitbart News, told young conservatives in a speech at the Heritage Foundation in July that his goal was “the full destruction and elimination of the entire mainstream media.” He’s not alone. This sentiment can be found at almost every level of the conservative media today. From my CJR essay:

The Gateway Pundit flatly declared, “The mainstream media is your enemy.” And Infowars captured the sentiment by featuring an editorial cartoon depicting right-wing media figures as asteroids hurtling toward earth where news-network dinosaurs await their “extinction.”

In a decidedly dystopian spin on service journalism, some in the conservative media have begun providing their audiences with how-to guides for finishing off the journalistic establishment. [Radio host Rush] Limbaugh told his listeners they should stop consuming news from the mainstream press altogether. “I’ll let you know what they’re up to,” he assured them. “And as a bonus, I’ll nuke it!” [Fox News’s Sean] Hannity urged his viewers to start targeting individual journalists—and their bosses—on social media. And the alt-right blogger Roosh Valizadeh has called for a coordinated campaign of bullying aimed at reporters. “Make them appear as ‘uncool’ salarymen in the eyes of the public,” he wrote. “Mock their appearance, their mannerisms, and their weaknesses.”

Most Americans might be inclined roll their eyes at all this rhetoric. But the widespread destructionist attitude toward American journalism on display in the conservative media today means that Trump would have a loud and enthusiastic cheering section if he ever decided to actually follow through on his threat to the networks. And given the immense political power these figures have demonstrated over the past two years—culminating in the election of a conservative media darling to the presidency—it would be a mistake to take their agenda lightly.