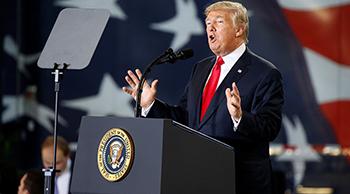 One mystery has been solved as Donald Trump implied that his “calm before storm” remark was indeed about North Korea. “We can’t let this go on” with Pyongyang, he said when asked to clarify his phrase which sparked speculation in the media.

In a Fox News interview with Sean Hannity on Wednesday, the first question that Trump was asked was whether he was thinking of North Korea when he made his enigmatic comment earlier in October. “It seems related to ‘Rocket Man’ Kim Jong-un… in terms of them [North Korea] having nuclear capability,” Hannity said.

Trump essentially confirmed that he was making the remark about Kim. However, he didn’t specify the message.

“We can’t let this go on. We just can’t,” Trump said, responding to Hannity’s question.

Trump made the mysterious comment last week following his meeting with senior US military officials at the White House. When reporters arrived, the president said: “This is the calm before the storm.”

“What’s the storm? On Iran? On ISIS? On what?” one of the reporters asked.

“We have the world’s great military people,” Trump replied. “Thank you all for coming.”

When asked by an NBC News reporter one more time what “storm” he had referred to, Trump said “You’ll find out.”

Trump also criticized the Agreed Framework deal between North Korea and ex-President Bill Clinton back in 1994.

“Before… the ink was dry on the contract, they were already starting again with the missiles, and with the nuclear, frankly,” he said.

Trump and Kim have repeatedly exchanged harsh words. On one occasion, Trump vowed to “totally destroy” North Korea if the US were attacked.
Pyongyang has responded in kind, threatening to reduce the US to “ashes and darkness” and calling for nationwide struggle against ‘war-thirsty’ Trump.

Washington is to continue military drills in the region with its long-standing allies South Korea and Japan. Earlier in October the USS ‘Ronald Reagan’, with nearly 80 aircraft on board, entered the South China Sea on its way to the shores of South Korea. The drills will likely be held around October 20. 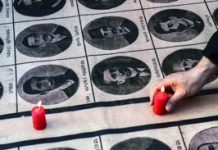