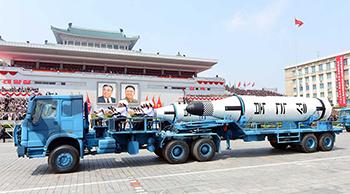 Pyongyang will not give up its nuclear program under any conditions, North Korea’s Foreign Minister has emphasized, stating that the US has “lit the fuse of war” and that Washington should cease its hostile actions first.

US President Donald Trump, who has been eagerly exchanging personal insults with North Korean leader Kim Jong-un and threatening military action on multiple occasions, is the one who “lit the fuse of war,” Pyongyang’s top diplomat, Ri Yong-ho, told TASS in an interview released Wednesday.

Therefore, our nuclear arsenal is a “deterrent that guarantees peace and security in the region and the right of the Korean nation to exist and develop,” Ri said.

The punitive sanctions, imposed by the United Nations Security Council (UNSC) are also a product of Washington’s hostility against North Korea, the diplomat claimed, adding, that the US is trying to gather more nations under its banner to further tighten the restrictions.

Russia has repeatedly warned that attempts to pressure North Korea into stopping its nuclear missile program through sanctions could only lead to further confrontation, especially amid the never-ending war of words by Washington and Pyongyang while threatening to destroy each other.

“Ramping up military hysteria in such conditions is senseless. It’s a dead end. It could lead to a global, planetary catastrophe and a huge loss of human life. There is no other way to solve the North Korean nuclear issue, save that of peaceful dialogue,” President Vladimir Putin said in September, just days after North Korea conducted its sixth nuclear test.

“They will eat grass, but will not stop their program as long as they do not feel safe,” Putin pointed out.

North Korea appears to share a similar stance, as their FM reiterated his country’s position; that the only condition for talks between Pyongyang and Washington is that the US “should abandon its hostile policy and the nuclear threat against the DPRK.”

The US, however, does not appear to be that eager to negotiate with Pyongyang. While Secretary of State Rex Tillerson stated that Washington maintains contacts with North Korea, Trump claimed that his foreign policy chief was simply “wasting his time trying to negotiate with ‘Little Rocket Man,’” in reference to North Korean leader Kim.

Trump tweeted last week that any talks with North Korea were pointless, a waste of time, involved “massive amounts of money” and that “only one thing will work,” presumably referring to military action once again.

There’s a possibility for direct dialogue with Seoul instead, according to Ri, but only if the South starts to conduct its own policy instead of blindly following the US.

“As long as [South Koreans] resort to sanctions and pressure against us, following the US policy, we see no prospect for improving inter-Korean relations,” he said.

South Korea has been ramping up its military activity, conducting joint drills with the US and its regional allies, rendering the prospect of direct talks between the two Koreas virtually impossible.

Apart from flexing its military muscle, Seoul has also repeatedly threatened Pyongyang with a preemptive strike and has allegedly plotted to exterminate the North’s top leadership.

Just on Tuesday, two South Korean F-15K fighter jets joined American B-1B supersonic bombers from Guam to conduct a “simulated air-to-ground missile-firing drill” with the Americans and the Japanese over the Korean Peninsula.

Amid the ongoing sabre-rattling, Moscow and Beijing have been pushing for the so-called ‘double freeze’ initiative since July. The Sino-Russian proposal aims for North Korea to suspend its missile and nuclear tests in exchange for South Korea and the US abandoning their joint military exercises. Washington has dismissed the initiative and continues to show muscle in the region.