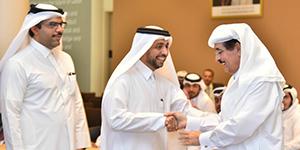 American Jewish groups are increasingly concerned that Hamad Bin Abdulaziz Al-Kawari, the Qatari candidate for the next director-general of UNESCO — the UN’s educational, scientific and cultural organization — is growing closer to achieving his goal following his success in Tuesday’s second round of voting for the post.

Al-Kawari came first in the ballot, with 20 out of 58 votes on UNESCO’s Executive Board. His nearest rivals, Audrey Azoulay of France and Moushira Khattab of Egypt, won 13 and 11 votes respectively. The winner, expected to be announced by Friday, will be the first candidate to reach 30 votes.

In a statement on Wednesday on Al-Kawari’s candidacy, Conference of Presidents of Major American Jewish Organizations Chairman Stephen M. Greenberg and Executive Vice Chairman and CEO Malcolm Hoenlein blasted the support for Al-Kawari as “a disappointing example of political hypocrisy and expedience which threatens the future credibility and effectiveness of UNESCO.”

Greenberg and Hoenlein said Al-Kawari had violated UNESCO’s fundamental values by “endorsing, encouraging, sponsoring and supporting projects and programs with blatant anti-Semitic content.” Al-Kawari had done so “as an official of a country that regularly aligns itself in the UN with international efforts singling out Israel and questioning foundational principles of the Jewish faith,” they continued.

The two went on to say that UNESCO’s Executive Board “appears to be squandering the chance to put those ideals and values ahead of base political considerations,” and urged members to vote for an alternative candidate.

Similar concerns were expressed earlier this week by the Anti-Defamation League, which noted “a foreword [Al-Kawari] wrote in a book that includes charges of Jewish domination of the media, as well as his endorsement of Culture Ministry-organized book fairs that included antisemitic speakers and texts, such as the Protocols of the Elders of Zion.”

The book to which Al-Kawari contributed a preface — entitled Jerusalem in the Eyes of the Poets and published by his own Ministry of Culture in 2013 — traffics in classical antisemitic conspiracy theories, claiming that Jews enjoy complete control of the Western media, and that Israel is responsible for the entire range of conflicts and wars in the Middle East. The work of the late French Holocaust denier Roger Garaudy is cited by the book in support of the claim that the Jewish people have no historical connection to the Land of Israel.

Opposition to Al-Kawari on the UNESCO Executive Board is now being spearheaded by Qatar’s bitter Arab rival, Egypt, which has aligned with Saudi Arabia and other Arab states in isolating the oil and gas-rich emirate because of its ties with Iran and with Islamist terrorist groups.

On Wednesday, Egyptian Foreign Minister Sameh Shoukry told Egypt Today that Qatar was using its considerable financial muscle to to win votes on the executive board.

“[UNESCO] is an organization that is owned by international society and cannot be sold to a particular state or individual,” Shoukry was quoted as saying, when asked about Al-Kawari’s campaign slogan, “I’m not coming empty handed.”

The UNESCO vote for its next director general lasts for a maximum of five rounds. If two candidates remain tied at the end, lots are drawn to decide the winner.