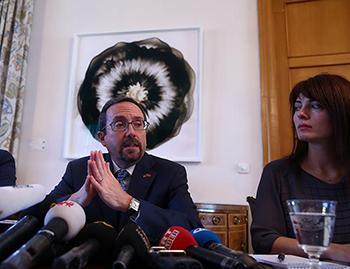 Ankara and Washington are in discussions to try to resolve the spat over the arrest of a U.S. consulate staffer, Ambassador of the US to Ankara John Bass said on Oct. 11, adding that they are “still seeking an explanation” from Turkey for the detention of U.S. mission staff.

Bass said he hopes the two countries can quickly resolve crisis between the two NATO allies, triggered by the arrest of a U.S. Istanbul Consulate staff member and leading to mutual suspension of visa services.

“When a government takes concrete measures against our local staff and when that government does not provide any visibility about the reasons for doing so, when some people in that government choose essentially try the guilt or innocence of those people in the media, in the court of public opinion instead of in court of law, that raises concerns for our government,” he said.

However, Bass refrained from giving conditions necessary to lift the visa suspension, saying they would “rather keep diplomatic discussions away from public eye.”

Discussions between the two sides have not yet revealed the evidence or reasons for charges against U.S. consulate staff, Bass added.

Two locally employed U.S. consulate staff members in Turkey have been arrested this year. The second arrest at the Istanbul consulate, Metin Topuz, last week led to the U.S. announcing on Oct. 8 that it had stopped issuing non-immigrant visas in Turkey – a move reciprocated within hours by Ankara.

“It is quite unusual for a government to detain and arrest employees of a diplomatic mission without discussion about the reason for doing so. I am not suggesting that our Turkish employees enjoy the legal protections of accredited diplomats. That’s not we are talking about here. We are talking about host government actions against the operations of the diplomatic mission holistically,” Bass stated.

Asked about remarks by President Erdoğan blaming Bass for prompting the dispute, the ambassador said the U.S. “did not intend to disrupt a long-standing relationship with Turkey” and the two countries would continue to engage on the issue.

“Every government has the sovereign right to decide how it will interact with the representatives of the diplomatic community and specific countries. We certainly respect the Turkish government’s right to establish the parameters for interaction, how and when they are going to talk to foreign ambassadors. We do the same thing in Washington. I am sure [Turkish Ambassador to the U.S. Serdar] Kılıç has had times when he wished he could see U.S. government officials more frequently than he did,” Bass said.

‘No one hiding at our missions’

He also stressed that there is “no one hiding” at any U.S. diplomatic facilities in Turkey, in response to media reports claiming that another consulate staff was being protected at the U.S. Istanbul Consulate.

“No one is hiding in any of our facilities. To the best of our knowledge there has also been no outstanding request for our local staff to come and talk to [prosecutors] or to appear for detention,” Bass added.

The detained consulate official Topuz was responsible for dealing with “the organized drug enforcement agency and was working closely with Turkish law enforcement officials to help them on crime networks and drug networks in Turkey” the ambassador said, emphasizing that this cooperation yielded some important prosecutions.

“We are not aware of other contacts that Topuz has had that exceeded his duties. If there is concrete evidence to that effect, we’d welcome it if we could determine whether he was engaged in things that he should not have been engaged in,” Bass added.

Asked about an Istanbul prosecutor’s demand for information about alleged phone calls between the U.S. Istanbul Consulate and Adil Öksüz, a key suspect in the July 2016 coup attempt, Bass said “sending e-mails” to the embassy is not the appropriate way to demand information.

“There is an established process that the two governments signed regarding law enforcement of criminal cases under investigation. There is process for each information request and that process was not pursued,” he stated.

Bass said cooperation between the two allies had helped reduce terror attacks in Turkey, adding that close security cooperation ensured that the Islamic State of Iraq and the Levant (ISIL) was no longer able to carry out the kind of attacks that plagued Turkey in 2015 and 2016.

He also denied deep suspicion in the Turkish media and among political parties regarding Washington’s intentions for Turkey and the region.

Meanwhile, a spokesperson for the State Department confirmed late on Oct. 10 that the U.S.’s decision to suspend visa services at diplomatic facilities in Turkey was coordinated with the State Department, the White House and the National Security Council, adding that Ambassador Bass had the “full backing” of the U.S. government.

“Our ambassadors tend not to do things unilaterally,” State Department spokeswoman Heather Nauert told a briefing.

“When they start arresting, detaining our people, our people who are responsible for law enforcement coordination, that is a … major concern of ours. That is why we took these steps,” she said.