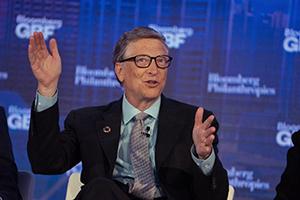 Bill Gates is losing hold of his title as the world’s richest person, with Amazon.com Inc. founder Jeff Bezos once again mounting a challenge for the top spot. But if Gates weren’t so philanthropic, it wouldn’t even be close.

Gates has a net worth of $86.8 billion on the Bloomberg Billionaires Index. He would be worth $150 billion if he hadn’t given away almost 700 million Microsoft Corp. shares and $2.9 billion of cash and other assets to charity, according to an analysis of his publicly disclosed giving since 1996. The index numbers are based on the close of trading in New York Wednesday.

And if not for more than a decade of donating Berkshire Hathaway Inc. shares to charity, Warren Buffett, who is ranked No. 3 in the index with $80.6 billion, would be right behind Gates with $135 billion. Bezos, who passed Gates for a few hours earlier this summer, has a net worth of $85.3 billion, according to the Bloomberg index, a daily ranking of the world’s 500 richest people.

“Bill Gates and Warren Buffett have a set a new bar in terms of the raw scale of their giving,” said Jacob Harold, chief executive officer of GuideStar, a non-profit that collects information on charities. “I hope and anticipate that that’s a bar that’s going to be exceeded someday. Maybe not in the near future, but at some point. The sheer scale of it is truly remarkable.”

Both Gates, 61, and Buffett, 87, have done most of their giving through the Bill & Melinda Gates Foundation, which aims to improve global issues like health care and poverty. The foundation has made $41 billion in direct grants, including to GuideStar, and holds assets worth $40.3 billion, according to the charity’s website.

Gates and Buffett also founded the Giving Pledge in 2010, and have been joined by 168 others who’ve committed to give most of their wealth to charity. Still, billionaire philanthropy makes up a small piece of total giving. Last year, the Bill & Melinda Gates Foundation gave away $4.3 billion, a little more than 1 percent of the $390 billion donated to charities in the U.S., according to data from the Giving Institute. American individuals provided more than 72 percent of charitable funding.

Bezos, 53, is just starting to focus on philanthropy, and in June tweeted a request for ideas on how to help people now. Since 2002, Bezos has given away Amazon shares worth at least $400 million at current prices, according to a Bloomberg analysis of Form 4 filings. The billionaire said in April that he sells $1 billion of Amazon stock every year to fund his space business Blue Origin LLC. He sold that amount one month later.

Bezos and Spanish retailer Amancio Ortega have both challenged the hold Gates has had on the top spot since May 2013. Ortega, whose net worth peaked at $85.9 billion in June 2, has since fallen behind Buffett to the No. 4 spot with a net worth of $79.8 billion.