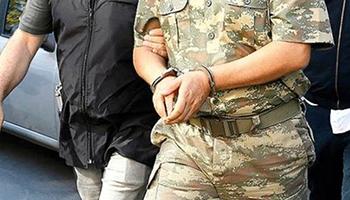 The Mardin Chief Public Prosecutor’s Office has issued detention warrants for 25 soldiers of various ranks as part of a witch-hunt targeting people claimed to have links to the Gülen movement, which is accused by Turkish authorities of orchestrating a failed coup in Turkey last year, the state-run Anadolu news agency reported on Thursday.

According to the report, 10 soldiers were detained in operations in 13 Turkish provinces and the Turkish Republic of Northern Cyprus (KKTC).

The Konya Chief Public Prosecutor’s Office on Tuesday issued detention warrants for 70 military members as part of an investigation into members of the faith-based Gülen movement.

Nineteen military personnel were detained on Oct. 5 across Turkey as part of a Trabzon-based operation targeting the movement.

Detention warrants were issued for 152 former and active duty officers in September over alleged links to the Gülen movement.

The Gülen movement is accused by the Turkish government of mounting the coup attempt, but the movement strongly denies any involvement.

One hundred thirty generals and admirals in the Turkish military were either dismissed or suspended as part of the widespread purge following the failed coup attempt in July of last year.

The government has been at the center of criticism for turning the Turkish forces into a political Islamist military in line with the wishes of President Recep Tayyip Erdoğan.

In February Defense Minister Işık said 30,000 new recruits would be enlisted in the Turkish military.

A month later Işık declared that the ruling Justice and Development Party (AKP) government had dismissed a total of 22,920 military personnel (6,511 officers and 16,409 cadets) after the coup attempt although the Turkish military stated on July 27 that only 8,651 military members including cadets and conscripts took part in the failed coup.

The Cumhuriyet daily reported in March that the government plans to investigate 90,000 more military personnel over links to the Gülen movement.

“If it was a coup perpetrated by the Gülen movement and 22,920 military personnel were dismissed for their connections to the movement as Erdoğan and the government assert, why did only 8,651 military members participate in the coup?” is a question being asked by critics.

Regulations that task retired officers and noncommissioned officers with recruiting cadets and military personnel went into effect in January amid debates that it was a gift to SADAT A.S. International Defense Consulting, which has also been called President Recep Tayyip Erdoğan’s “secret army.”

SADAT was directed by retired Brig. Gen. Adnan Tanrıverdi, who was appointed as an adviser to President Erdoğan. Tanrıverdi is known for his Islamist ideology and has counseled Erdoğan for years although in an unofficial capacity, columnist Abdullah Bozkurt wrote for Turkish Minute on Nov. 25.

In June, an imam-hatip, or religious high school, in İzmir province promised its graduates preference in enrollment at military and police academies.

Some find the Turkish government’s efforts to Islamicize the Turkish army alarming and warn that NATO risks having a member army filled with extremists.

In February, Henri Barkey, director of the Middle East Program at the Washington-based Wilson Center, said that many generals purged by the Turkish government are pro-NATO and pro-American, saying this could create a shift in Turkey-NATO relations.