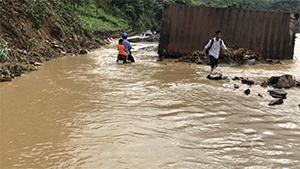 HANOI, Vietnam –  Floods and landslides caused by a tropical depression have killed 54 people in northern and central Vietnam while rescuers were trying to search for another 39 people still missing, officials say.

Disaster official Nguyen Thi Lien from northern Yen Bai province where six people have died from the floods says 580 soldiers and police and more than 2,000 residents have been mobilized to search for another 16 still missing in the province.

The tropical depression hit central Vietnam on Tuesday. Another tropical storm, Khanun, is moving to the South China Sea toward Vietnam, according to the national weather forecasters.