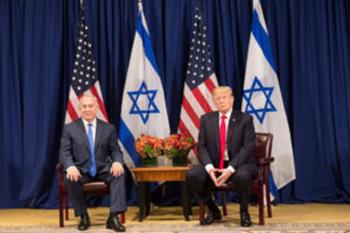 By decertifying the Iran-nuke deal, President Trump would put another Mideast war of choice on the table, but war on Iran is really the choice of Israel and Saudi Arabia wanting the U.S. to do the killing and dying, as Trita Parsi explains.

Make no mistake: We do not have a crisis over the Iran nuclear deal. It is working and everyone from Defense Secretary James Mattis and Secretary of State Rex Tillerson to the U.S. and Israeli intelligence services to the International Atomic Energy Agency agree: Iran is adhering to the deal.

But President Trump is about to take a working deal and turn it into a crisis – an international crisis that very likely can lead to war. While the decertification of the Iran deal that Trump is scheduled to announce on Friday in and of itself doesn’t collapse the deal, it does trigger a process that increases the risk of war in the following five ways.

The nuclear deal, or the Joint Comprehensive Plan of Action (JCPOA) took two very bad scenarios off the table: It blocked all of Iran’s paths to a nuclear bomb and it prevented war with Iran. By killing the deal, Trump is putting both of those bad scenarios back on the table.

As I describe in my book Losing an Enemy – Obama, Iran and the triumph of Diplomacy, it was the very real danger of a military conflict that drove the Barack Obama administration to become so dedicated to find a diplomatic solution to this crisis. In January 2012, then-Secretary of Defense Leon Panetta stated publicly that Iran’s breakout – the time it would take from making the decision to build the bomb to having the material for a bomb – was 12 months. In spite of massive sanctions on Iran aimed at both retarding the nuclear program and convincing the Iranians that the nuclear program was too costly to continue, the Iranians aggressively expanded their nuclear activities.

By January 2013, exactly a year later, a new sense of urgency dawned on the White House. Iran’s breakout time had shrunk from 12 months to a mere 8-12 weeks. If Iran decided to dash for a bomb, the United States might not have enough time to stop Tehran militarily.

According to former CIA deputy director Michael Morell, Iran’s shrinking breakout time caused the U.S. to be “closer to war with the Islamic Republic than at any time since 1979.” Other countries realized the danger as well. “The actual threat of military action was almost felt as electricity in the air before a thunderstorm,” Russian Deputy Foreign Minister Sergey Ryabkov told me.

If nothing changed, President Obama concluded, the U.S. would soon face a binary option: Either go to war with Iran (due to pressure from Israel, Saudi Arabia and some elements inside the U.S.) to stop its nuclear program or acquiesce to Iran’s nuclear fait accompli. The only way out of this lose-lose situation was a diplomatic solution. Three months later, the U.S. and Iran held a pivotal secret meeting in Oman where the Obama administration managed to secure a diplomatic breakthrough that paved the way for the JCPOA.

The deal prevented war. Killing the deal prevents the peace. If Trump collapses the deal and the Iranians restart their program, the U.S. will soon find itself facing the same dilemma that Obama did in 2013. The difference is that the President is now Donald Trump, a man who doesn’t even know how to spell diplomacy, let alone conduct it.

Decertification is only half the story. Trump also plans to significantly escalate tensions with Iran in the region, including taking a measure that both the Bush and Obama administrations rejected: Designate the Iranian Revolutionary Guards Corps (IRGC) as a terrorist organization. Make no mistake, the IRGC is far from an army of saints. It is responsible for much of the repression against the population inside of Iran and it fought the U.S. military indirectly in Iraq through Shia militias. But it has also been one of the most critical fighting forces against ISIS.

In real terms, the designation does not add much to the pressure the U.S. already is or can impose on the IRGC. But it ratchets things up in a very dangerous way without any clear benefits to the United States. The drawbacks, however, are crystal clear.

IRGC commander Mohammad Ali Jafari issued a stern warning last week: “If the news is correct about the stupidity of the American government in considering the Revolutionary Guards a terrorist group, then the Revolutionary Guards will consider the American army to be like Islamic State [ISIS] all around the world.” If the IRGC acts on its warning and targets U.S. troops – and there are 10,000 such targets in Iraq – we will only be a few steps away from war.

Escalation is under all circumstances a dangerous game. But it is particularly dangerous when you do not have diplomatic channels that ensure that the other side reads your signals correctly and that provide mechanisms for de-escalation. Not having such exit-ramps is like driving a car without a brake. You can accelerate, you can crash, but you can’t brake.

Military commanders understand this. That’s what former chairman of the Joint Chiefs of Staff Admiral Mike Mullen warned about prior to the Obama administration investing in diplomacy. “We’ve not had a direct link of communication with Iran since 1979,” Mullen said. “And I think that has planted many seeds for miscalculation. When you miscalculate, you can escalate and misunderstand… We are not talking to Iran, so we don’t understand each other. If something happens, it’s virtually assured that we won’t get it right — that there will be miscalculation which would be extremely dangerous in that part of the world.”

Mullen issued this warning when Obama was president, a man often criticized for being too restrained and too unwilling to use military power. Imagine how nervous and worried Mullen must be today with Trump calling the shots in the situation room.

There is no secret that Israel, Saudi Arabia and the UAE have been pushing the U.S. for years to go to war with Iran. Israel in particular was not only making threats of preemptive military action itself, its ultimate aim was to convince the United States to conduct the attack on Iran’s nuclear facilities for Israel.

“The intention,” former Israeli Prime Minister Ehud Barak admitted to the Israeli paper Ynet in July of this year, “was both to make the Americans increase sanctions and to carry out the operation.”

While the Israeli security establishment today opposes killing the nuclear deal (Barak himself said as much in an interview with the New York Times this week), there are no indications that Israeli Prime Minister Benjamin Netanyahu has changed his mind on this matter. He has called on Trump to “fix or nix” the deal, though his criteria for how to fix the deal is so unrealistic it virtually ensures the deal will collapse – which in turn would put the U.S. on a path to war with Iran.

The only person who arguably has a worse sense of judgment than Trump is Netanyahu. After all, this is what he told U.S. lawmakers in 2002 as he lobbied them to invade Iraq: ”If you take out Saddam, Saddam’s regime, I guarantee you that it will have enormous positive reverberations on the region.”

Some have suggested that Trump is pursuing the decertification of the Iran deal – in spite of the near consensus advice of his top advisors to not go down this path – as a result of pressure from his base. But there is no evidence that his base cares much about this issue.

Rather, as Eli Clifton meticulously had documented, the most dedicated force behind Trump’s obsession with killing the Iran deal is not his base, but a tiny group of top Republican donors. “A small number of his biggest campaign and legal defense donors have made extreme comments about Iran and, in at least one case, advocated for the use of a nuclear weapon against the Islamic Republic,” Clifton wrote last month.

The billionaire Home Depot founder Bernard Marcus, for instance, has given Trump $101,700 to help pay Trump and Donald Trump Jr.’s legal fees following the probe into Russian election interference. Hedge-fund billionaire Paul Singer is another major donor to pro-war groups in Washington who Trump has relied upon for financial support. The most famous billionaire donor, of course, is Sheldon Adelson who has contributed $35 million to pro-Trump Super PAC Future 45. All of these donors have pushed for war with Iran, though only Adelson has gone as far as to suggest the U.S. should strike Iran with nuclear weapons as a negotiating tactic.

Thus far, Trump has gone with the advice of these billionaires on Iran over that of his Secretary of State, Secretary of Defense and Chairman of Joint Chiefs of Staff.

None of the above five scenarios were realistic a few months ago. They have become plausible – even likely – because Trump has decided to make them so. Just like with George W. Bush’s invasion of Iraq, Trump’s confrontation with Iran is a war of choice, not a war of necessity.