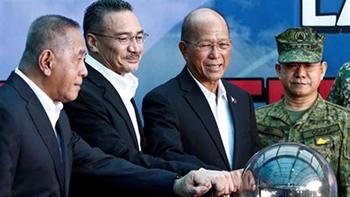 Malaysia, Indonesia, and the Philippines will begin coordinated air patrols off the strife-torn southern Philippines next month to combat the growing threat posed by extremist militants, an official said Friday.

The neighbors had already launched joint sea patrols four months ago in the same area, the Sulu Sea.

Fears have been growing that the Daesh group is trying to establish a Southeast Asian outpost in the southern Philippines after gunmen waving the extremists’ black flag occupied the city of Marawi in May.

They have fought off a US-backed military assault for almost five months and the conflict has left hundreds dead.

There have also been a spate of kidnappings in the Sulu Sea by the Abu Sayyaf, a Philippine extremist group.

A ceremony to announce the patrols was held Thursday at Subang air force base outside Kuala Lumpur and was attended by defense ministers from the three countries.

A Malaysian Defense Ministry spokeswoman said the patrols were aimed at combating the threat from “Daesh (IS), piracy, and sea robberies.”

The countries will take turns to lead the patrols, with Malaysia starting in November, followed by the Philippines in December and Indonesia in January.

In a speech at the ceremony, Malaysian Defense Minister Hishammuddin Hussein said that some $40 billion in trade passed through the Sulu Sea every year and no single country could police the waters alone.