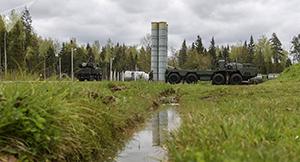 According to media reports, Russia and Saudi Arabia are set to conclude a contract for the delivery of S-400 missile systems.

Vladimir Kozhin, the presidential aide for the military-technical cooperation, said that the S-400 deal with the Saudis would take place “In the very near future,” adding that “now there are negotiations, coordination.”

According to media reports, Saudi Arabia can buy four or more divisions of the S-400 Triumph air defense systems.

Earlier, on October 9 Russian Presidential Press Secretary Dmitry Peskov had stated that that the deal to supply Saudi Arabia with S-400 SAMs has good prospects.

The S-400 Triumph is a new-generation mobile missile system which carries three different types of missiles, and is intended to engage aircraft as well as ballistic or cruise missiles.

It combines multi-functional radars, detection and targeting systems, anti-aircraft missile systems, launchers and a control center. The first tests were carried out in 1999. Development was completed in 2004. It has been in service with the Russian Armed Forces since 2007.