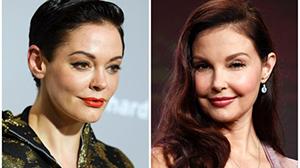 A row has broken out over the suspension of actress Rose McGowan’s Twitter account, with the social media platform accused of applying a double standard in the enforcement of its “terms of service”.

McGowan, who was the target of disgraced Hollywood mogul Harvey Weinstein’s unwanted sexual advances and reached a private settlement with him in 2007, has been in the spotlight in the wake of the new allegations.

Though she has refrained from discussing her experience in detail – a condition of the agreement she would have signed as part of the settlement – she has not failed to have her voice heard.

One of McGowan’s tweets was “flagged” for breaching the platform’s terms of service, but the issue remains that Twitter responded immediately to such a flag while other, more inflammatory accounts, are often untouched.

McGowan published a screen shot of the message she had received from Twitter, advising her that she had violated their terms of service and would be locked out of her account for 12 hours.

Reactivation of the account in such cases is contingent on deleting the offending material. As of Friday morning, McGowan’s account was active again.

Twitter has confirmed the suspension was put in place because McGowan published a private telephone number, which is a violation of the platform’s terms of service. It is still unclear where the complaint came from; any user of the Twitter platform can flag content as inappropriate at which point it is referred internally for review.

In the deleted tweet from from October 11, McGowan wrote: “Anonymously sent to me. They all knew. It starts here”. Attached was an image of a portion of an email that offered to set up a meeting with Bob, presumably Bob Weinstein from context, at a hotel in the early evening. It contained the full email signature of the person sending it, including their phone number.

TWITTER HAS SUSPENDED ME. THERE ARE POWERFUL FORCES AT WORK. BE MY VOICE. #ROSEARMY #whywomendontreport

The move on Twitter’s part to suspend the account – whatever the justification – provoked a storm of outrage online, with high-profile users of the platform sending a barrage of critical replies.

Many of the critical tweets referred to US president Donald Trump, who has been accused of using his Twitter account to bully, intimidate, make racist remarks and threaten other countries.

The platform has also been criticised for taking too long to respond to comments from online trolls and neo-Nazis sympathisers.

Actress Jamie Lee Curtis said: “You allow Twitter freedom to our president but you silence a woman speaking out about sexual harassment?”

Director Paul Feig said: “Wow, Twitter, seriously? This is the account you suspend but not Trump who threatened to wipe out another country? Suspend me too, please.”

And actress Jessica Chastain posted a copy of Twitter’s terms of service, and asked: “Let us know which of these rules [Rose McGowan] broke. Asking for multiple victims of sexual violence.”

Twitter’s terms of service give it a wide latitude to suspend accounts, either on the basis of publishing threatening material, the use of offensive language or exposing Twitter to legal action.

In one of McGowan’s more provocative exchanges, she re-posted comments from actor Ben Affleck in which she said he was sickened by the allegations against Weinstein. McGowan accused him of lying, suggesting they had spoken in the past about Weinstein’s actions.

In the meantime, Twitter is on the back foot given both the extent of the allegations against Weinstein and the fierce reaction it has provoked in both Hollywood and around the world.

Since the first reports of sexual harassment allegations were published by the New York Times, allegations of sexual assault have also surfaced and an unprecedented number of high-profile actresses in Hollywood have spoken publicly about their treatment by Weinstein.

“Twitter is proud to empower and support the voices on our platform, especially those that speak truth to power,” the spokesperson said.

“We stand with the brave women and men who use Twitter to share their stories and will work hard every day to improve our processes to protect those voices.”