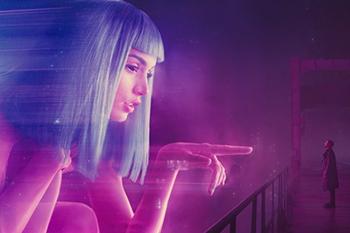 The film wrestles with ideas of artificial consciousness in exciting new ways while still paying homage to Ridley Scott’s classic.

The hero of Blade Runner, Ridley Scott’s 1982 dystopian masterpiece, isn’t Rick Deckard (Harrison Ford), the cop who finds and kills “replicants” (bioengineered androids) for the LAPD in a grim, rain-drenched futurescape. It’s his primary target, Roy Batty (Rutger Hauer), an escaped combat unit seeking a cure to the four-year lifespan built into his system. Roy is super-strong and terrifying, to be sure, and unafraid to commit murder, but Scott shoots the tow-headed Hauer like an angel, especially in his unforgettable death scene, as he saves Deckard’s life and crouches over him, imparting his strange, alien memories to his would-be assassin before expiring.

In the world of Blade Runner, replicants are an underclass used as slave labor. Deckard’s arc in the film is one of empathy—he’s a bounty hunter who begins to understand the humanity of his quarry, both in his fearsome respect for Roy and his love for Rachael (Sean Young), another replicant who’s unaware of her true nature. The debate about whether Deckard is a replicant himself is the mysterious undercurrent to Scott’s movie, but not its beating heart. Roy’s final monologue is so magical because it’s the moment where Deckard, and viewers, finally realize the enemy is not the unstoppable monster he appeared to be.

Officer K (Ryan Gosling), the protagonist of Denis Villeneuve’s long-awaited sequel Blade Runner 2049, has the same job Deckard did. But at the start of the film we’re told he’s a replicant—a more compliant model designed to hunt and kill his own kind. At first glance it feels like the screenwriters Hampton Fancher (who also wrote the original) and Michael Green are making the subtext text by acknowledging K’s artificiality. After all, Blade Runner leaves its audience wondering whether Deckard’s understanding that Roy is more than a machine is simply a humane realization, or some deeper self-awareness that he is himself a replicant. If the audiences already knows K is a replicant, how interesting can it be to watch him rise up against his human masters?

But Villeneuve’s film has an entirely different goal, which is what makes it so brilliant as a sequel. The philosophical question at the center of Blade Runner 2049 is not whether K is a replicant, but whether any of us is “real,” whatever labels we may be assigned. K’s character arc in the film is one of slowly developing agency, an arc that’s mimicked by the many artificial characters around him (most of this movie’s ensemble isn’t human). Blade Runner 2049 centers on K’s quest to uncover the identity of Rachael and Deckard’s child, the first ever born to a replicant, and for much of the movie he’s convinced he might be that messianic figure. He isn’t, and his suspicions end up being a red herring—K’s heroism, and his consciousness, is not defined by his parentage, but by his gradually evolving free will, which Villeneuve tracks step by meticulous step.

In the world of Blade Runner 2049, the old “Nexus” replicants of the original movie are artifacts, long ago phased out because of their potential for rebellion. K is a newer-generation model designed to obey orders, tracking down remaining Nexuses like Sapper Morton (Dave Bautista), whom he kills in the film’s opening sequence. At Sapper’s homestead, K finds the skeletal body of Rachael and realizes she died in childbirth. K’s boss Joshi (Robin Wright), who is human, is horrified by the news. She orders K to eliminate the replicant child, knowing its existence will grant other replicants a notion of personhood that they currently lack, disrupting the repressive caste system that’s in place.

To Villeneuve, K’s “soul” isn’t conferred by the manner of his creation, but by his agency.

“I’ve never retired anything with a soul before,” K muses when ordered to kill Rachael’s child, positing that if you were born, you must have a soul—something that K lacks, as Joshi reminds him. “Are you saying no?” she asks, incredulously. “I wasn’t aware that was an option,” he deadpans, but that question begins to gnaw at him going forward. Gosling’s performance is a wonderfully nuanced take on artificiality, borrowing some of the ironic, noirish detachment of Ford’s work as Deckard (who he played as a taciturn gumshoe) but mixing in a sense of innocence. K is a walking weapon designed as a tool of the police; he’s deadly with a firearm and appears to possess an ultra-powerful computer brain for quick deduction. But he’s also always eager to please Joshi, and seems to have genuine sympathy for targets like Sapper, whom he plaintively asks to surrender rather than put up a fight.

Still, he’s burdened with awareness—the kind that Rachael and Deckard (if you believe he’s a replicant) lack in Blade Runner. He knows that his memories, including a haunting dream about a wooden statue he owned as a child, are fakes. And the same goes for his girlfriend Joi (Ana de Armas), a virtual companion who exists as a holographic projection built into his apartment. Early on in the film, K buys her a portable “eminator” device, which allows him to bring her along wherever he goes; but still, she freezes up any time he gets a phone call, and he can turn her off anytime he needs to go back to work. Joi is a deeply empathetic character, and yet K is constantly worried that her affection for him is merely coded in.

The mystery of Rachael’s child leads K down a twisty plot path toward Deckard, who now lives in hiding. For a while, K is convinced he’s the special child, which would make for the simplest explanation for his character evolution in the movie, as he starts to disobey Joshi’s orders and his compliant programming. But in the end, it turns out he’s just a regular replicant doing remarkable things, like going on the lam, rescuing Deckard, and doing battle with Niander Wallace (Jared Leto), the industrialist who wants to learn the secret of replicant reproduction for his own capitalistic ends. That ordinariness is the lynchpin of K’s character. It’s also a refutation of the model followed by so many other “legacy sequels,” which try to explicitly link their protagonists to the original heroes, often by having them be related to one other.

To Villeneuve, K’s “soul” isn’t conferred by the manner of his creation, but by his agency—the same independence that Joshi fears will spread across the world once news of replicants’ potential to have children is leaked. She’s right to be afraid. That idea of creating life freely, and out of love, is elemental enough to shake K from his programming, and it inspires an underground movement of replicants led by Freysa (Hiam Abbass), who help K on his journey and safeguard the true identity of Rachael’s child. Knowing he hoped the child was him, Freysa consoles K with the knowledge that self-sacrifice is the real ideal to aspire to, one that’s “more human than human.” K does indeed end up dying to protect the child, with Hans Zimmer’s score mimicking the notes of Roy Batty’s death scene as he collapses on the ground. It’s a subtle mirroring of the original, from an entirely different perspective: K becomes extraordinary by doing something very ordinary and very human.

K isn’t the only artificial being in the movie to achieve freedom in death, though. A fascinating subplot in Blade Runner 2049 revolves around Joi, who seems designed to be even more compliant than K, spending her every waking moment showering him with compliments and attention. Though she’s bonded to K, she craves her freedom too, eventually asking him to release her from her “prison” (his apartment) by moving her entire program over to his portable eminator. Eventually, it’s destroyed, and she dies, totally erased from the system after deleting her own computer backups—but that is a finality she seeks, saying it’ll make her “just like a real girl.”

Then finally, there’s Deckard himself, whose own artificiality remains up for debate, in Villeneuve’s biggest homage to the original Blade Runner. Deckard protected his child, he tells K, by going into hiding—making his own heartbreaking choice, and escaping the cycle of death he was once involved in. Late in the film, Niander Wallace takes him prisoner and wonders whether Deckard was designed to mate with Rachael, the ultimate end-goal of a breeding program fashioned by their makers, or if their union was simply a biological miracle. Deckard regards Wallace with utter scorn, having long ago realized that question—where he came from—doesn’t matter. “I know what’s real,” he growls.