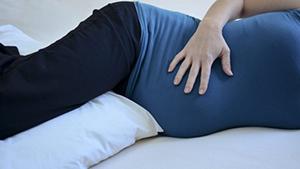 Pregnant women have long been advised to sleep on their sides and not on their backs, but a new study which tracked unborn bubs and their mothers’ sleeping positions highlights exactly why it’s so important to follow this recommendation.

The research, published in the Journal of Physiology, found that when a mother slept on her back, her baby was less active. In fact bubs, were only active when expectant mamas slept on their left or right side. (Fetal activity is one measure of a baby’s well-being).

While prior work has established that maternal sleeping position – specifically sleeping on the back – is associated with increased risk of stillbirth, compared to sleeping on the left or right side, the reasons why remained unclear.

It is known, however, that sleeping on the left side of the body increases the amount of blood and nutrients that reach the placenta and the baby.

To explore the effect of a mum’s sleeping position on fetal behaviour, a team of researchers from the University of Auckland, recruited 30 women between 34-38 weeks pregnant. All participants were healthy, with healthy singleton pregnancies.

Mums were studied in their home with researchers setting up an infrared video camera to record their spontaneous sleep positions. The heart rate of both women and their bubs were also recorded continuously overnight using an ECG.

The researchers found that women most often fell asleep on their left sides and remained in that position for more than half of the night. However, women did spend a median of one hour and 23 minutes asleep on their backs. The videos also captured a phenomenon many pregnant women will find oh-so familiar – that of frequent loo visits. “The timing of arising to toilet was spread widely throughout the night,” the researchers note.

When it came to the bubs, as well as being most active when their mums were on their sides, they also moved the most in the hours between 9 pm and 1am. But why is fetal activity so important? There are a number of reasons.

The team’s findings have important implications. “In the situation where the baby may not be healthy, such as those with poor growth, the baby may not tolerate the effect of maternal back sleeping,” the researchers note. “We are suggesting that there is now sufficient evidence to recommend mothers avoid sleeping on their back in late pregnancy, not only because of the epidemiological data but also because we have shown it has a clear effect on the baby.”

The team will now focus on investigating pregnancies where the fetus is not growing properly or the mother has reported decreased fetal movements, both of which have been associated with an increase risk of stillbirth.

Earlier this year, another University of Auckland study found that women who sleep on their backs during the last three months of pregnancy are almost four times more likely to experience a stillbirth.

“Our findings make sense as lying on the back in late pregnancy is associated with physical effects that can compromise the baby’s well-being,” said lead researcher Professor Lesley McCowan. “These include a reduction in the mother’s cardiac output (the amount of blood pumped by the heart per minute), a reduced blood flow to the uterus, and lower oxygen levels in the baby”.

Why am I always cold? 10 medical reasons for cold intolerance