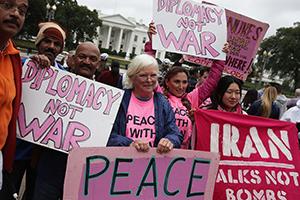 President Donald Trump is expected on Friday to refuse to certify that the multinational accord to curb Iran’s nuclear program sufficiently serves U.S. interests, though he will stop short of abandoning it, according to two senior administration officials.

Trump will make the declaration in a speech where he will outline a broader Iran policy aimed at curtailing what the administration sees as the Islamic Republic’s malign behavior in the Middle East — including its sponsorship of terrorism, the officials said.

After twice acquiescing to arguments from his advisers and U.S. allies, who say Iran is keeping its end of the deal by curtailing its nuclear program, Trump is expected to refuse to certify Iran’s compliance again in advance of Oct. 15, the next deadline set by a law Congress passed to supervise the agreement.

After Trump decertifies that the deal is in the interests of the U.S., Congress will have 60 days to introduce legislation reimposing sanctions on Iran that were eased under the agreement — a move that would be likely to kill the accord.

But Trump is expected to ask Congress to hold off sanctioning Iran for now and instead amend the law, the Iran Nuclear Agreement Review Act, according to the officials, who asked not to be identified ahead of Trump’s speech. He will ask that Congress set benchmarks for Iranian action, for example by imposing new restrictions on its ballistic missile program.

Trump’s argument will focus on a line in the legislation that asks him to certify that lifting sanctions is “appropriate and proportionate” to Iran’s moves to end its nuclear program. He will argue that Iran is getting far more than it’s giving up under the deal, according to the people.

Trump’s move is a gamble that Congress will give his administration time to pressure other nations for new constraints on Iran. Leading Republican opponents of the Iran deal, including Senator Tom Cotton and House Foreign Affairs Committee Chairman Ed Royce, back Trump’s approach.

“As flawed as the deal is, I believe we must now enforce the hell out of it,” Royce said at a committee hearing on Wednesday.

But Senator Ben Cardin, the top Democrat on the Senate Foreign Relations Committee, said on MSNBC Thursday that “we don’t know what Congress will do” because “the pressure may build” to take action quickly.

Trump is also expected to focus criticism on Iran’s Islamic Revolutionary Guard Corps, which the U.S. sees as behind malign activity by Iran, such as its funding for Hezbollah and its support for the regime of Syrian leader Bashar al-Assad.

Efforts to unwind or rewrite the accord will be a hard sell to the other nations that joined the U.S. in hammering it out in months of talks — not only Iran, China and Russia but also the U.K., France and Germany. The U.S. assertion that Iran isn’t complying with the agreement “contradicts the assessment of all member states of the European Union — and it contradicts our assessment,” German Foreign Minister Sigmar Gabriel told reporters in Berlin on Oct. 9.

European ambassadors to the U.S. have lobbied members of Congress in recent weeks in an effort to protect the agreement.

The administration believes Iran will never agree to change the 2015 accord, so the goal would be to build a separate architecture outside the deal targeting the sunset clauses and other perceived flaws, the officials said. Secretary of State Rex Tillerson spoke with foreign ministers from France, Germany and the U.K. on Wednesday and Thursday.

European leaders have echoed some of Trump’s concerns, especially about Iran’s ballistic missile program and its support for groups they consider terrorists. One European diplomat said on condition of anonymity that allies hope to “create a win” for Trump by endorsing his criticism of Iran in the hope that he will move on to other issues.

According to the officials, Trump is expected to frame the decertification decision as only one part of a broader policy review on Iran, a months-long process aimed at figuring out how to confront the country’s hostile activity in the Middle East, not just its nuclear program.

Now the focus shifts to Congress. Senator Bob Corker — the Tennessee Republican who heads the Senate Foreign Relations Committee and has been involved in a Twitter feud with Trump in recent days — will play a key role.

The administration has ideas for amending the Iran legislation that likely would include new ways to box in the country while also removing the requirement that Trump certify Iranian compliance every 90 days, the officials said.

— With assistance by Kambiz Foroohar