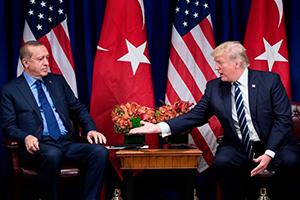 The approach has been more “yes we can” than “make America great again.”

And yet on the thorny question of Turkey, Trump’s approach has been more “yes we can” than “make America great again.” Like Obama in his first term, Trump now suffers the delusion that a personal relationship with Turkey’s autocratic leader, Recep Tayyip Erdogan, can advance U.S. interests. Instead, this putative ally is acting like an enemy.

Last month at the U.N. General Assembly, Trump said of Erdogan: “We have a great friendship, and I think we’re as close as we’ve ever been.” So how does Turkey return the favor? By acting like Iran.

Last week, Turkish authorities arrested a second Turkish national working for the U.S. diplomatic mission in Turkey. Ankara did not even bother to tell the U.S. Embassy the charges. On Tuesday, a Turkish court sentenced a Wall Street Journal reporter of Finnish-Turkish citizenship to 25 months in prison on terrorism charges for the crime of reporting on Turkey’s crackdown against its Kurdish population in 2015.

This says nothing of the arrests of U.S. citizens in 2016 in the aftermath of the failed coup against Erdogan’s government. A year ago, the Turks arrested an American pastor, Andrew Brunson, on the charges that he was part of an armed group seeking to overthrow the government, a charge U.S. authorities find no evidence to support.

To be sure, Erdogan has legitimate quarrels with U.S. policy. He has seethed since the failed coup that the U.S. has harbored the man he accuses of orchestrating the attempt, Fethullah Gulen. Gulen is an Islamist cleric who has lived in the U.S. since 1999. The U.S. is also arming and training a group of Kurdish Syrian fighters affiliated with the Kurdish separatists in Turkey, another major irritant in the relationship.

Allies have quarrels all the time. But recently Erdogan has crossed a line. Last month for example, Erdogan suggested in a speech that Brunson could be traded for Gulen. An ally would present serious evidence to the U.S. that Gulen orchestrated the 2016 coup attempt from the U.S., and if this evidence passed muster from a court in an immigration hearing, there would be legal grounds for extraditing Gulen to Turkey to face justice. So far however, U.S. officials say they have seen no hard evidence to support Erdogan’s claims.

Detaining U.S. citizens, arresting Turkish nationals who work for U.S. diplomatic missions and sentencing a reporter who works for an American newspaper is what an adversary does. Think of the cold war Soviet-U.S. prisoner swaps or Iran’s recent arrests of U.S. dual nationals, which it traded for billions of dollars in cash during the implementation of the Iran nuclear deal.

“They are engaging in Hezbollah-like behavior and taking hostages to use as trade bait,” Eric Edelman, who served as U.S. ambassador to Turkey between 2003 and 2005, told me this week. Edelman said he suspects Erdogan is more interested in exchanging prisoners for Reza Zarrab, a Turkish gold trader who was arrested last year for violating sanctions against Iran through dollar transactions that went through Turkey and the United Arab Emirates. Erdogan’s government has urged the U.S. at the highest levels to drop the case against Zarrab.

U.S. officials told me this week that Secretary of State Rex Tillerson and National Security Adviser H.R. McMaster have been troubled by Erdogan’s brinkmanship for months. Tillerson himself has brought up Brunson’s detention in his conversations with Erdogan and other top Turkish officials since he took the job. After Erdogan suggested Ambassador John Bass had suspended new visa applications for Turks to come to the U.S., this week State Department spokeswoman Heather Nauert said the ambassador’s decision was cleared by the White House and the State Department. That said, Trump himself has yet to change his tone when it comes to Erdogan.

All of this is reminiscent of Obama in his first term. Back then Obama went out of his way to court the Turkish leader. He praised Turkey as a model of a Muslim democracy and boasted in a 2012 interview with Time that Erdogan was one of the five world leaders with whom his personal connections unlocked new diplomatic opportunities.

But like his failed attempt to reset relations with Russia, Obama eventually learned that Erdogan was just another cynical authoritarian. U.S.-Turkish relations have gotten much worse since Obama’s personal charm offensive with Erdogan. Today the Turks are targeting U.S. citizens and foreign service nationals to short circuit our own legal system. If Trump really wanted to distinguish himself from his predecessor, he should start showing Turkey’s leader the same respect Erdogan has shown for him.