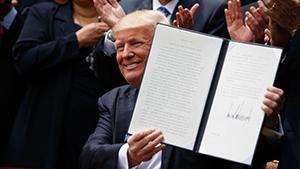 It’s the latest effort in the president’s bid to ultimately “repeal and replace” what’s considered the signature legislation of his White House predecessor.

Word of Trump’s latest plan came from two people familiar with the decision, who spoke to the Associated Press. They requested anonymity because they were not authorized to speak publicly.

The White House said in a statement that the Department of Health and Human Services has determined there is no appropriation for cost-sharing reduction payments to insurers under the Obamacare law.

Trump’s decision was expected to rattle already-unsteady insurance marketplaces. The president has previously threatened to end the payments, which help reduce health insurance copays and deductibles for people with modest incomes, but remain under a legal cloud.

The president’s action will likely to trigger a lawsuit from state attorneys general, who contend the subsidies to insurers are fully authorized by federal law, and the president’s position is reckless. Xavier Becerra, California’s attorney general, called the decision “sabotage,” and promised a lawsuit.

After the president’s intentions were disclosed, leading Democrats in Congress were quick to criticize the plan.

“If these reports are true,” the Democrats said in the joint statement, referring to the president’s plans, “the president is walking away from the good-faith, bipartisan Alexander-Murray negotiations and risking the health care of millions of Americans.”

The Democrats were referring to bipartisan talks being led by Sen. Lamar Alexander, R-Tenn., and Sen. Patty Murray, D-Wash., to seek a bipartisan agreement for funding ObamaCare subsidies and stabilizing health insurance markets.

But the changes Trump hopes to bring about could take months or even longer. That’s according to administration officials who outlined the order for reporters. The proposals may not be finalized in time to affect coverage for 2019, let alone next year.

Trump signed the order in the White House’s Roosevelt Room surrounded by Vice President Mike Pence, members of his Cabinet and Congress.

Trump employed the executive order because the Republican-controlled Congress has been unable to pass a plan to repeal and replace ObamaCare.

Trump says the health care system “will get better” with his action, and the action will cost the federal government nothing.

The president says he still wants Congress repeal and replace the Obama health care law. But he says his order will give people more competition, more choices and lower premiums.