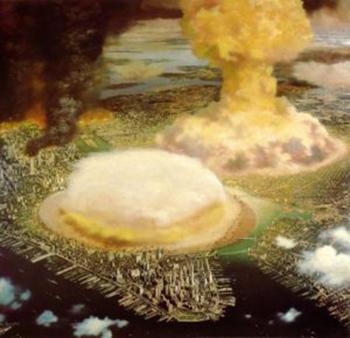 There are acres of print analyzing “will he, or won’t he” in respect to President Trump taking military action in North Korea. And equally, volumes on what Trump may intend to do in respect of Iran: Is he engaged primarily in rhetorical “theatre” to please his base, and earn press plaudits; or is he girding up for attrition (hot or cold) against Iran?

The unanswered question is: does President Trump regard North Korea and Iran as somehow connected (albeit that Iran has no nuclear weapons, and no nuclear weapons program)? Certainly one person – one who talks to the Trump family a lot – does think the two are directly linked.

Jeffrey Sachs, who listened to Trump’s speech at the United Nations, in which the President said he was ready to “totally destroy” North Korea, tells us about the audience reaction: “Well, you could hear shuffling, chuckles, amazement, gasps, a few applause. There was Netanyahu enthusiastically applauding. It was a very odd scene. I am still a bit shaken by it.”

Of course, for Israeli Prime Minister Benjamin Netanyahu and some neoconservatives, a U.S. attack on the Korean nuclear program sets a wonderful precedent for Iran – for now or for the future.

We just do not know. Trump’s former career as a reality TV host has left him with a predilection for teasing and hype (“just tune in again next week, to learn more”). What is increasingly plain is that those on the inside – such as the Chair of the Senate Foreign Affairs Committee – are equally unsure whether President Trump is about to unleash “World War III” – or not.

We do know, however, that Trump regards himself as an expert on nuclear conflict: in an 1984 interview with the Washington Post, Trump said that he hoped one day to become the United States’ chief negotiator with the Soviet Union for nuclear weapons. Trump claimed that he could negotiate a great nuclear arms deal with Moscow. Comparing crafting an arms accord with cooking up a real estate deal, Trump insisted he had innate talent for this mission.

In a 1990 interview with Playboy, Trump said, “I think of the future, but I refuse to paint it. Anything can happen. But I often think of nuclear war.” He explained: “I’ve always thought about the issue of nuclear war; it’s a very important element in my thought process. It’s the ultimate, the ultimate catastrophe, the biggest problem this world has, and nobody’s focusing on the nuts and bolts of it.”

Trump continued expressing the notion that nuclear annihilation could be on the horizon: “Oh absolutely. I mean, I think it’s sick human nature. If Hitler had the bomb, you don’t think he would have used it? He would have put it in the middle of Fifth Avenue. He would have used Trump Tower, 57th and Fifth. Boom.”

In another Playboy interview — this one in 2004 — Trump once more conveyed his nuclear despondency. He was asked, “Do you think Trump Tower and your other buildings will bear your name a hundred years from now?” Trump responded, “I don’t think any building will be here — and unless we have some very smart people ruling it, the world will not be the same place in a hundred years. The weapons are too powerful, too strong.”

During a Republican presidential debate in December 2015, candidate Trump said: “The biggest problem this world has today is not President Obama with global warming. … The biggest problem we have is nuclear – nuclear proliferation, and having some maniac, having some madman go out and get a nuclear weapon. That’s in my opinion, that is the single biggest problem that our country faces right now. … I think – I think, for me, nuclear is just the power, the devastation is very important to me.”

“So for decades, it seems” David Corn writes in Mother Jones, “Trump has been haunted by the feeling that nuclear war may be inescapable. Now he is in a position to do something about the matter.”

And, as former Director of National Intelligence James Clapper remarked, “[If] in a fit of pique he [Trump] decides to do something about Kim Jong Un, there’s actually very little to stop him. …The whole [nuclear weapons] system is built to ensure rapid response if necessary. So there’s very little in the way of controls over exercising a nuclear option, which is pretty damn scary.”

In short, should a fatalistically inclined U.S. President order nuclear tactical weapons strikes – possibly believing that nuclear conflict is somehow inevitable – there is almost nothing to stop him.

So, what might all this mean for Iran? The Iranian leadership is no more likely to know whether Trump intends to attack North Korea than Senator Bob Corker, but it must plan for the worst case – and that is, if North Korea is attacked, the case will be made by Israel, and by Iran hawks in America, that Iran will be in a position to weaponize when the Joint Comprehensive Plan of Action (JCPOA) has run its course – and that this threat must be pre-empted. (This argument is something of a canard, since Iran is committed to signing the NPT’s Additional Protocol – which provides for intrusive IAEA inspections – even when the JCPOA is complete).

During a meeting with military leaders earlier this month, Trump specifically linked North Korea and Iran, saying his administration was focused on “challenges that we really should have taken care of a long time ago, like North Korea, Iran, Afghanistan, ISIS, and the revisionist powers that threaten our interests all around the world. … We cannot allow this dictatorship [North Korea] to threaten our nation or our allies with unimaginable loss of life. … We will do what we must do to prevent that from happening. And it will be done, if necessary – believe me.”

But Iran must also prepare for the other possibility, too.  Iran is not threatening the U.S. with nuclear weapons, and Trump’s reference to Iran – as a regional bad actor – may be to please his base, play to American Irano-phobia generally, and to gratify a (vulnerable-feeling) Israel and Saudi Arabia.

In the latter case, Trump may hope to have his cake – and to eat it, too.  He can de-certify Iran as being in non-compliance with the JCPOA. (De-certification is a purely U.S. domestic matter, which throws the burden of what to do next onto Congress. The latter must decide whether or not to re-impose the nuclear-related sanctions on Iran – after a 60-day period of cogitation. Should Congress reinstate sanctions, the U.S. would be in default on the JCPOA agreement – though the agreement would still legally stand, until and if, the United Nations Security Council should jointly, resolve otherwise).

There is some circumstantial evidence to suggest that this maybe what Trump plans: to have his cake and eat it, too. The Republican majority in the Senate is wafer thin. Trump’s bitter humiliation of Sen. Bob Corker, head of the Foreign Relations Committee, and someone with influence over Democratic senators, makes little sense, were he, Trump, to want Congress to threaten re-imposed sanctions on Iran – should the latter not agree either to tougher JCPOA terms, or to (separate) restrictions on the Iranian missile program.

Congress will be well aware of the difficulties – with gaining support of U.S. allies; in cajoling the U.N. Security Council; and of the U.S. global reputation for serial inconstancy. Even in Washington, it is understood that the triumvirate of White House generals is opposed to igniting a conflagration with Iran, and that Iran too, will never agree to renegotiate the JCPOA.

Indeed, Iran will want no truck with White House talks. Trump can nevertheless “spin” it as Trump, the “hard man,” while setting up Congress to be seen publicly again, as the “weak” component, buckling under the various (real) impedimenta. It will be difficult for Congress, nonetheless – given the wide antipathy in America towards Iran – not to sanction Iran further on whatever pretext.

These thoughts might give Iran some reassurance, but not much. Iran cannot count on the Europeans, whose banks and financial institutions are already succumbing to sanctions fright. Europe talks of countering any US imposed sanctions on Iran, but does it have the necessary grit?

But more significantly, the Iranian leadership will be aware that Israel is attempting to bully the U.S. into committing to “red lines” for Syria, concerning the Iranian, Hezbollah and Iraqi militia presence there – in the wake of ISIS’s defeat in Syria. Israel will be looking for those “red lines” to have the backing of U.S. military force.

For, as Israeli commentators have made plain, Israel has only limited capacity to sustain civilian casualties in any future conflict involving Hezbollah in Lebanon – let alone across an extended front of confrontation extending from the Mediterranean to the Euphrates River. There is a sense building that Israel is coaxing its “prize bull” towards intervening first, in Syria and then, secondly, in Iran.

Iran cannot count on Defense Secretary (and retired General) Jim Mattis holding the line against a new Middle East major intervention (though he is known to oppose it). Iran has no choice, it must be tough. Which is why Iran is busy constructing a new “resistance” front with Turkey and Iraq (Syria is already there) – and with building military structures of deterrence against Israel. Iran, too, has set its own “red line”: “designate the IRGC as a terrorist group, and Iran will do similar for U.S. forces” – a “red line” that permits Iran flexibility of response, depending on how it judges events. But just to be clear, unless somehow arrested, the configuration of events is converging towards new tensions across the Middle East.

All of which takes us the full circle back to our initial (Rumsfeldian) “known unknowns”: How far has Bibi Netanyahu, through his Jared Kushner conduit, convinced President Trump of the inevitability of having to take action against North Korea and Iran – and of the inexorability of the use of nuclear weapons. (During the 2016 campaign, MSNBC’s Joe Scarborough reported that Trump had thrice asked a national security adviser why a president couldn’t use nuclear weapons.)

We just don’t know what Trump might order – and, nor it seems, does anyone else — least of all, in Washington.