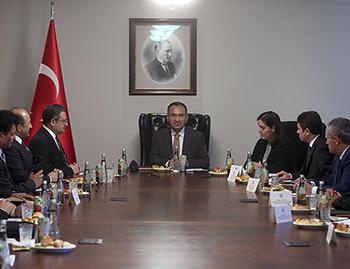 Turkey will not allow a terror corridor to be established near its Syrian border, Deputy Prime Minister Bekir Bozdağ has said, as he commented on the situation in Afrin, which is under the control of the Syrian Kurdish Peoples’ Protection Units (YPG).

“It should be known that Turkey will not allow the establishment of a terror corridor in that area,” Bozdağ told private broadcaster Habertürk on Oct. 12, adding that Turkey knows the presence of the outlawed Kurdistan Workers’ Party (PKK), the Democratic Union Party (PYD) and YPG in Afrin.

“Afrin is extremely significant. We know the PKK, PYD and YPG presence there and in case of a threat and danger aimed at the Turkish border, immediate response is given from us. Thus, we are extremely disturbed by the terror group and its extensions exerting dominance in both Afrin and other places. We see this as a threat against Turkey’s national security,” he also said.

Saying that the PYD, YPG and PKK presence in Afrin threaten Turkey, Bozdağ noted Turkey is “vigilant against everything that threatens it.”

“We will see how the developments will unfold in time. I find it early to discuss now what precautions will be taken in the process in the following days. However, Turkey will not allow a terror corridor in the area. It will not allow changes to be carried out in the region with fait accompli. Turkey will not abstain from taking all the necessary precautions to protect its nation and people,” he added.

Bozdağ’s remarks came days after Turkey launched an operation in Syria’s largely jihadist-controlled northwestern province of Idlib, which is largely controlled by the Hay’at Tahrir al-Sham (HTS), spearheaded by a former al-Qaeda affiliate that changed its name last year from the Nusra Front.

Recent reports said an unmanned Turkish drone flew on Oct. 10 over an area that encircles Afrin in order to gather information about whether the YPG is planning an attack on Azaz.

During his speech, Bozdağ said all the steps Turkey will take in this region will be coordinated with Iraq and Iran in line with “international legitimacy.”

“Turkey, Iran and Iraq will act together in order to prevent new fires from erupting and to protect peace, stability and trust environment in the region,” he said, adding that due to the 910 kilometer-long border between the countries, what happens in Syria concerns Turkey.

“It is normal for Turkey to evaluate what is happening in Syria as if they are happening inside the country, because all the events there are directly affecting Turkey’s national security,” he noted.

“We are spending efforts to establish a peace corridor rather than a terror corridor in the region,” Prime Minister Binali Yıldırım commented on the Idlib operation a day earlier.

“We do not have eyes on anyone’s soil. We are aware of the terror corridor that has been attempted to be established and we will take precautions in advance. We are trying to form a peace corridor in the region,” Yıldırım said late on Oct. 11, as he added that the move was in line with accords in Astana peace talks aimed at ending the Syrian war.