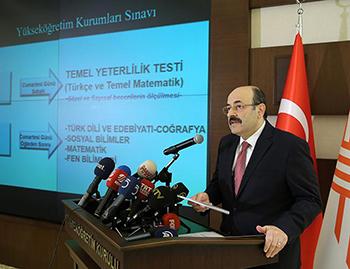 Turkey’s Higher Education Board (YÖK) head Prof. Dr. Yekta Saraç announced the details of the new university entrance exam at a press meeting held on Oct. 12, saying Turkish language and mathematics will be at the center of the new exam.

The board will take the curriculum of the Education Ministry as the basis, Saraç said.

The exams will be conducted in two parts, completed over one weekend, the YÖK head said. In the previous system, exams were spread over almost a four-month period.

“Families and students should never feel uneasy. Our students should not change their studying methods; they should hold on to their classes tightly. With this new regulation, also taking into account the exemplary executions in the world, we want to make [the system] more plain, more systematical, and manageable,” Saraç said.

Discussions for a change in the national university entrance exam were triggered after President Recep Tayyip Erdoğan told reporters on Sept. 19 that the government was mulling a new system for universities in addition to the abolition of the Transition from Primary Education to Secondary Education (TEOG) exam.

“[A change in the university entrance exam system] will also happen. YÖK is working on that area too,” Erdoğan had said.

The new exam’s name has been announced as the “Higher Education Institutions Exam” (YKS) by Saraç on Oct. 12.

After taking the basic Turkish and mathematics tests in the first part of the exam covering 80 questions conducted on a Saturday morning, following an afternoon break, candidates will then take the second part covering four tests: Turkish literature and geography, more advanced mathematics, physical sciences, and social sciences.

Those wishing to take a foreign language exam will take another part on Sunday of the same weekend, tested on 80 questions.

All candidates are obliged to take the first part on early Saturday, Saraç said, as they need to obtain at least 150 points to choose any university program. The weight of this exam will be 40 percent of the overall points.

According to the new system, one of the four exam result types will be taken into account (quantitative, verbal, equal-weighted, and foreign language) when students are admitted to universities, instead of the current 18 different result types.

Asked when the new exam system would come into effect, Saraç said: “This system will be put into execution on the first exam this year. Without losing any time, we will put it into effect this year.”

Meanwhile, the new system that will replace TEOG is still in limbo, with the officials not having made an announcement in regards to this new system.

But the daily Milliyet on Oct. 12 said in a report that the Education Ministry sent circular notices to provincial directorates, instructing them to undertake preparations for a new exam to be applied to fifth graders for the first time in December this year.

The name of the exam has been reported as the “National Monitoring Exam” in the circular notice.

The exam will include questions only on Turkish, mathematics, and physical sciences, and initially consist of mostly test questions, with a small amount of also open-ended questions.