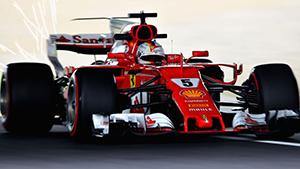 Ferrari president Sergio Marchionne says the Formula One title fight with Mercedes is not over despite the Scuderia’s awful run of reliability.

Three engine failures for the team in the last two races, on the back of a double DNF in Singapore, has seen Sebastian Vettel slip 59 points behind Lewis Hamilton in the standings – a total that means the Briton can claim the championship as early as the United States GP.

Should Vettel pull off an unlikely comeback it would be the largest points deficit ever overhauled in a Formula 1 title race, but Marchionne believes Ferrari can still claim a first Drivers’ Championship since 2007.

“The season is not lost,” Marchionne told Sky Sports in Italy. “There is still time to get it done. With all the modesty we have in Ferrari, the car has made tremendous progress.”

Failure at the Japanese GP meant Ferrari haven’t claimed a race victory since before the summer break – a drought of five Grands Prix – while Mercedes and Hamilton have won four in that time.

“I do not speak about bad luck because I do not believe it,” Marchionne added. “Things are happening to everyone, especially for us in the race. The important thing is to not lose the confidence that has brought us here so far.