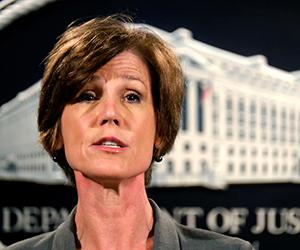 FBI special counsel Robert Mueller must meet a high bar to prove criminal conduct in his probe of possible collusion between the Trump campaign and Russia — and might not bring charges at all, according to two former high-profile prosecutors.

“I know a lot of people are sort of putting all their hopes into Bob Mueller. And I’ve got tremendous confidence in Bob Mueller,” Yates said, the Journal reported.

“But the fact of the matter is, he’s going to determine whether there’s proof beyond a reasonable doubt that felonies were committed, that crimes were committed that can be used for prosecution or impeachment.”

Mueller “is not going to answer the question of whether anything bad happened here,” she added.

Bharara agreed it is possible Mueller “may not decide that there is an offense to be charged or referred to the House of Representatives for impeachment.”

“And I’ll respect that. And I think people who are on one side of the fence should respect that also,” he said.

“I hope that we want still in America, people to be putting together a team . . . whose goal only is to find out the truth and apply the law and facts fairly,” he said.