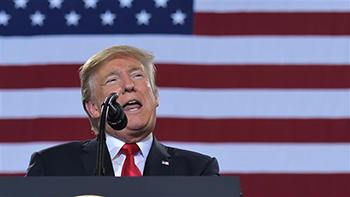 By Nick Wadhams and Margaret Talev

President Donald Trump declared a hardened stance toward Iran Friday as he refused to certify that the Islamic Republic is in compliance with the multinational accord to curb its nuclear program, though he stopped short of repudiating the pact.

Trump said the agreement wasn’t serving U.S. national security interests and that since the pact was reached in 2015 the Iranian regime’s aggression has only escalated. He promised new sanctions on Iran, particularly its hard-line Islamic Revolutionary Guard Corps, and threatened to terminate the agreement unless parties to the deal address its shortcomings.

“Iran is not living up to the spirit of the deal,” the president said. The regime has “spread death, destruction and chaos all over the globe.”

The move puts pressure on Congress to craft new legislation that would further isolate Iran. It also risks ratcheting up the intense regional rivalry between Saudi Arabia and Iran playing out in proxy wars across the Middle East, and it sets up a conflict between the U.S. and its allies.

The U.S.’s European allies responded swiftly with a joint statement from British Prime Minister Theresa May, German Chancellor Angela Merkel and French President Emmanuel Macron reaffirming their commitment to the deal, which they called “a major step towards ensuring that Iran’s nuclear programme is not diverted for military purposes.”

Iranian President Hassan Rouhani dismissed Trump’s speech in televised remarks as “nothing but baseless allegations and insults” even as he said his country would continue to abide by the nuclear agreement. He vowed Iran would redouble efforts to build its defense capabilities.

Saudi Arabia welcomed Trump’s announcement, praising his “vision and commitment to work with allies in the region to face challenges, mainly Iran’s hostile policy and movement,” according to a statement carried by the official Saudi Press Agency. The United Arab Emirates and Bahrain also came out in support.

Ben Cardin, the top-ranking Democrat on the Senate Foreign Relations Committee, blasted Trump’s stance as a “reckless, political” act that “is one of the most dangerous and consequential decisions the president has made imperiling U.S. national security.”

Moments before Trump spoke, the U.S. Treasury Department imposed new sanctions on the the hard-line Revolutionary Guard, designating it a supporter of terrorism for its backing of the Quds Force, which conducts operations outside Iran. But the Trump administration stopped short of declaring the Revolutionary Guard, which plays a key military and economic role within Iran, a foreign terrorist organization.

The designation is largely symbolic and wouldn’t have much practical impact beyond penalties the U.S. already has imposed, said Katherine Bauer, a former senior policy adviser on Iran in Treasury’s Office of Terrorist Financing and Financial Crimes in the Obama administration.

After twice acquiescing to arguments from his advisers and U.S. allies, who say Iran is keeping its end of the deal, Trump refused to certify Iran’s compliance with the accord, which gives it relief from sanctions in return for curtailing its nuclear program. Trump had to act in advance of Oct. 15, the next deadline set under a law Congress passed to monitor the agreement.

“We will not continue down a path whose predictable conclusion is more violence, more terror, and the very real threat of Iran’s nuclear breakout,” Trump said.

Trump attacked the nuclear deal as “one of the worst and most one-sided transactions the United States has ever entered into.” He said the accord threw an economic and political lifeline to a regime he called “the world’s leading state sponsor of terrorism.”

Congress now has 60 days to introduce legislation reimposing the sanctions on Iran that were eased under the agreement — a move that would be likely to kill the accord.

Instead, Trump asked Congress to amend the law, the Iran Nuclear Agreement Review Act. He requested that Congress set specific trigger points that would automatically re-impose sanctions unless it meets a list of U.S. demands, including to curb its ballistic missile program.

“I don’t want to suggest to you that this is a slam-dunk up there on the Hill, we know it’s not,” Secretary of State Rex Tillerson said. Legislation would put “much more stature behind this expectation we have on Iran than currently exists under the JCPOA,” he said.

The Joint Comprehensive Plan of Action is the agreement reached during President Barack Obama’s administration between Iran and the U.S., Germany, the U.K., France, Russia and China. All of the other participants — and inspectors from the International Atomic Energy Agency — say Iran is complying with it.

But the White House said in a statement that the Obama administration had a “myopic focus on Iran’s nuclear program to the exclusion of the regime’s many other malign activities.”

Trump’s move is a gamble that Congress will give his administration time to pressure other nations for new constraints on Iran. Leading Republican opponents of the Iran deal, including Senator Tom Cotton and House Foreign Affairs Committee Chairman Ed Royce, back Trump’s approach.

“As flawed as the deal is, I believe we must now enforce the hell out of it,” Royce said at a committee hearing on Wednesday.

Senator Bob Corker — the Tennessee Republican who heads the Senate Foreign Relations Committee and has been involved in a Twitter feud with Trump in recent days — will play a key role.

Corker offered the outline Friday of a measure he will propose calling for an “automatic snapback of U.S. sanctions” if Iran moves closer to having a nuclear weapon. It also calls for eliminating the “sunset provisions” in the nuclear deal, bolstering the powers of international inspectors and further limiting Iran’s advanced centrifuge program.

“The legislation would not conflict with” the nuclear accord on passage, according to Corker’s outline. “Instead, it would set conditions that halt Iran’s nuclear program and provide a window of time for firm diplomacy and pressure to work.”

Efforts to unwind or rewrite the accord will be a hard sell to the other nations that joined the U.S. in hammering it out in months of talks. The U.S. assertion that Iran isn’t complying with the agreement “contradicts the assessment of all member states of the European Union — and it contradicts our assessment,” German Foreign Minister Sigmar Gabriel told reporters in Berlin on Oct. 9.

The administration hopes to use the threat of congressional sanctions as leverage to persuade European allies to negotiate the new restrictions on Iran. Dennis Ross, who served as a foreign-policy adviser to three U.S. presidents, said that might prove a successful tactic “if the Europeans are truly desperate to keep us in the deal.”

“It’s like a red line,” Ross said of the idea to reimpose sanctions automatically if Iran defies the congressional demands. “You have to be careful about putting a set of triggers in there unless the triggers themselves are flexible enough.”

European ambassadors to the U.S. have lobbied members of Congress in recent weeks in an effort to protect the agreement.

With Russian President Vladimir Putin due to visit Iran soon, the Kremlin also called for the agreement to be upheld. A U.S. rejection of the deal would “definitely harm” global security and stability as well as nuclear non-proliferation efforts, Putin’s spokesman, Dmitry Peskov, told reporters on a conference call Friday. “It can seriously aggravate the situation,” since Iran has warned that it will quit the agreement in response, he said.

The administration believes Iran will never agree to change the 2015 accord, so the goal would be to build a separate architecture outside the deal targeting the sunset clauses and other perceived flaws, according to Tillerson.

One European diplomat said on condition of anonymity that allies hope to “create a win” for Trump by endorsing some of his criticism of Iran in the hope that he will move on to other issues.

Macron, May and Merkel said in their joint statement that they “share concerns about Iran’s ballistic missile programme and regional activities that also affect our European security interests. We stand ready to take further appropriate measures to address these issues in close cooperation with the US and all relevant partners.”