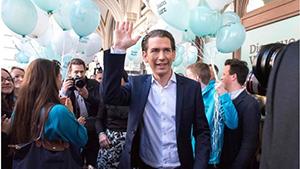 Austrians are voting in a general election in which the frontrunner, conservative party leader and current foreign minister Sebastian Kurz, is just 31 years old.

According to opinion polls, the far-right Freedom Party (FPÖ) and the Social Democrats are competing for second place.

The FPÖ is thought to have its best chance in years of joining the next coalition government and immigration has been a dominant issue in the campaign.

The party narrowly missed out on the presidency last year.

Norbert Hofer was defeated in December 2016 when Alexander Van der Bellen, the head of the Greens, won with about 53% of the votes.

Mr Hofer had campaigned on an anti-immigration platform, amid anxiety in Europe following a huge influx of migrants and refugees in 2015.

Mr Kurz has reinvented the conservative People’s Party (ÖVP) since becoming leader in May, moving it rightward with promises to shut down migrant routes to Europe and cap benefit payments to refugees at a low level.

He also vowed to bar other foreigners from receiving benefits until they have lived in Austria for five years.

He forced the snap election when he refused to continue in coalition with the Social Democrats, led by incumbent Chancellor Christian Kern.

The FPÖ accuse Mr Kurz of stealing their policies. Their candidate, Heinz-Christian Strache, has called him an “imposter”.

If his party wins, as polls suggest it will, Mr Kurz could become the youngest government leader in the world, and analysts say his party is likely to go form a coalition with the FPÖ.

Mr Kern warned on Saturday that the country “was at the most important crossroads in decades”.

After a tumultuous year with internal rifts the pro-refugee Greens are among several smaller parties uncertain of reaching the 4% vote threshold required to enter government.