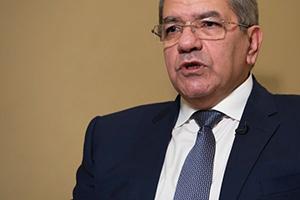 By Onur Ant and Ahmed Feteha

The repurchase transaction, which international banks offered to increase to $5 billion upon its extension, will remain unchanged in size and probably in duration, El-Garhy said, adding the final details aren’t yet confirmed.

The expected renewal fits into the government’s plans on deficit-financing and to make repayments on foreign debt, El-Garhy said Saturday in an interview in Washington, where he’s attending the International Monetary Fund’s annual meetings. A plan to sell $4 billion of dollar-denominated bonds and 1.5 billion euro ($1.8 billion) of euro-denominated debt will “most probably” take place in the first quarter of 2018, he said.

“We are diversifying our sources of financing,” El-Garhy said. “We might start with the dollar-denominated issuance and then we can go for the euro.”

The IMF is likely to provide another $4 billion in two tranches of financing before the fiscal year ends in June, said El-Garhy. Egypt agreed in 2016 to a three-year $12 billion IMF loan program.

Bond sales, the IMF loans and foreign investment in Egyptian Treasury bills are central to the government’s plans to finance the deficit, which is set to narrow to 9.5 percent of gross domestic product during the current fiscal year.

The government considers potential moves in international prices of imported items as the main risk to an otherwise improving fiscal outlook, said El-Garhy. Egypt is also contemplating a hedging mechanism to “ring fence” the budget against possible spikes in commodity prices, he said.

Egypt’s reform program — which included November’s flotation of the currency followed by two rounds of fuel and electricity price increases — has come at a hefty price domestically in a nation where around half of the population lives at or near the poverty line. Annual core inflation remains over 30 percent, near record highs.

Recent data on price movements are “encouraging” and suggest a move in consumer inflation to the “high teens” by January, El-Garhy said. The pace of price gains will likely reach the low teens around mid-2018, he said, which may pave the way for lower interest rates.