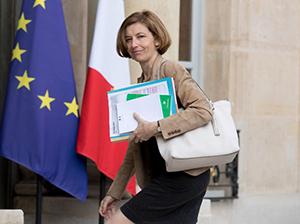 France is determined to preserve the 2015 nuclear agreement in the face of a hardened U.S. position as President Emmanuel Macron considers a potential trip to Iran.

“Everything that’s possible” should be done to save the Iran nuclear deal, Defense Minister Florence Parly told CNews in a televised interview Sunday. That’s in keeping with comments by Foreign Minister Jean-Yves Le Drian published by Agence France-Presse late Saturday. France hopes that the U.S. Congress will not jeopardize a “good agreement” because curtailing it would provoke an “infernal and very dangerous” situation, Le Drian said.

President Donald Trump disavowed the deal on Friday by refusing to certify that the Islamic Republic is in compliance with the multinational accord to curb its nuclear program, but stopped short of rejecting the pact. Just hours after Trump’s declaration, U.K. Prime Minister Theresa May, German Chancellor Angela Merkel and Macron issued a joint statement reaffirming the commitment to the accord.

While criticizing Trump’s stance on the nuclear deal, Le Drian also called for “tough” discussions with Iran on other issues. “We need to have a very clear explanation with the Iranians about their ballistic program and about their influence in the region,” and particularly in Syria, he told AFP.

Macron, who had a call Friday with Iranian President Hassan Rouhani, discussed with him a potential trip to Iran, which would be the first by a French leader since the 1979 revolution that toppled the Shah, according to AFP. Le Drian will travel to Tehran over the next weeks.

Separately, Parly told CNews that “effective” sanctions are needed on North Korea following its missiles launches. A dialog should be forged with North Korea, “but we are not yet there,” she said.