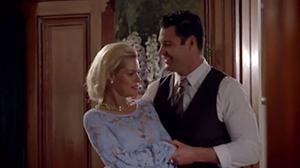 Much has been said of Sophie Monk’s harem of younger suitors on this season of The Bachelorette.

After the show’s first episode aired it was noted (read: reviled) that not one of the 18 men cast was older than the 37-year-old entertainer.

Although the show introduced four older men halfway through the season, as Monk has whittled her list down to six guys, just one is older than her. One is 24.

Of course, we like to think that we don’t care about age. It’s about the person, we tell ourselves. People mature at different rates: age is just a number.

In an interview with NW last month, Apollo (the aforementioned 24-year-old man still in the running to win Monk’s heart) was definitely pushing that argument.

“I know there’s a 13-year age gap between Sophie and I, but I’ve always thought of love not having boundaries,” he said.

But, despite how progressive we think we’ve become with this love business, age is actually a really big deal if you’re looking for love in 2017.

Consider it through a technological determinism framework (the natural starting point for all Sunday columns on relationships). On the most popular dating apps – like Tinder, or its slightly more woke cousin, Bumble – age is the only criterion users can set to filter their prospective matches beyond gender. Swipes are made on the basis of a person’s name, age and, if you’re lucky, a crap bio they copy-pasted from a Reddit forum.

In this sense, age has been centred in a way it was not before.

Imagine if you walked into a bar and everyone was wearing a name tag that instantly told you how old they were. That’s what using Tinder is like. But it’s weirder, because you’ve walked into the bar and everyone isn’t just wearing age tags: everyone above and below your selected age range isn’t there.

Age acts as both a fact and a filter: with each passing birthday, a Tinder user will age out of the age range set by thousands of people they could have matched with a day earlier.

There are other arbitrary criteria which could be used as baselines measurement of worth for Tinder users. The app could save men the character count of having to include “6’1″” in their bios (a safe figure, particularly considering no one under the age of 30 really gets the imperial measurement system) by making that the compulsory criterion.

What if all you knew about a prospective Tinder match was their name and their income? Or their age and how many times cleaned their bathroom each month?

Yet, this is not how app dating works. Age matters, and the age ranges set by users show that – surprise! – it matters in a kind of retroactive way.

According to data from eHarmony, the average Australian male heterosexual user on the website is looking to date women 5.5 years younger than himself when he sets his age range for potential matches. In contrast, heterosexual women are looking to date men 1.5 years older than themselves.

“Younger women are, on average, looking to date older guys. It’s not until around the age of 50 where they are starting to look towards younger men,” said eHarmony’s Jonathan Beber.

Beber said that, while younger men are okay with dating women slightly older than themselves, “that quickly changes at the age of 29, after which the older men get, the younger a partner they are open to dating”.

To be honest, if you’re a single woman wanting to end up with a younger man, maybe having a team of television producers select a couple of dozen isn’t a crazy idea.

Because while age may be just a number on our television screens, for the modern, dating app-using bachelorette, it plays a greater role than we like to admit.