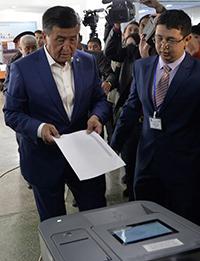 Former Prime Minister Sooronbay Jeenbekov is on course to win Kyrgyzstan’s presidential election in the first round, according to preliminary data from the country’s electoral commission.

Jeenbekov, who’s backed by outgoing President Almazbek Atambayev’s Social Democratic party, received more than 900,000 votes, or about 54 percent of the about 1.7 million cast. A total of 3 million people were eligible to vote in a country of 6.1 million, according to the Bishkek-based commission.

Businessman Omurbek Babanov, who heads the opposition Respublika party, was the second leading candidate, with about 600,000 votes. Should the results be confirmed, a run-off would not be necessary as Jeenbekov would have overcome the 50 percent threshold needed to win in the first round.

The central Asian republic’s election is seen as a genuine contest for power.

Rich in gold and other minerals, and host to a strategic Russian military base, Kyrgyzstan has had a turbulent history since independence in 1992, following the collapse of the Soviet Union. While autocrats in nearby Kazakhstan, Uzbekistan, Turkmenistan and Tajikistan have ruled for decades, the first Kyrgyz president, Askar Akayev, was overthrown in the 2005 “Tulip Revolution.” His successor, Kurmanbek Bakiyev, fled into exile in 2010, when rioters stormed the presidential palace amid corruption allegations.

Kyrgyzstan’s Roza Otunbayeva became central Asia’s first female head of state when she led an interim administration that drew up a new constitution limiting presidents to a single term, before stepping down ahead of 2011 elections won by Atambayev. He took Kyrgyzstan into the Russian-led Eurasian Union in 2015, a year after closing a U.S. military base used to support operations in Afghanistan since 2001.

The election comes after Kyrgyzstan voted in a referendum last year to change its constitution and shift powers from the president to the prime minister and government, which is dominated by Atambayev’s party. He’s denied opposition accusations that he plans to continue ruling the country as prime minister when his term ends.